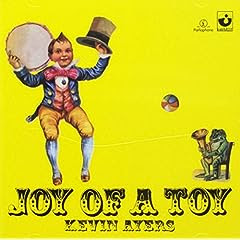 Kevin Ayers is sort of a lesser known musical cousin to Syd Barrett. His distinctive baritone voice exists in the same strange netherworld as Barrett, although Ayers seems much more in control of what he's expressing. Ayers served for one album as the leader of the tripped out and reknown London based Soft Machine (although significantly less reknown than Pink Floyd) and quickly split to start his solo career. Unlike Barrett, Ayers left more for the infamous creative differences, which seems to be accurate in this case. Ayers wanted to explore poppier avenues while the rest of the band soon followed their jazz-fusion, prog-rock muse. And like Barrett's The Madcap Laughs, Ayers created A Joy Of A Toy with the blessing, and even active particiption of his former bandmates.

A Joy Of A Toy has some definite attributes. There is a folkish vibe from the late 60's Cambridge scene audibly present, but Ayers does view into many interesting and sometimes unexpected venues of sound. Ayers' lyrics are uniformily of a high caliber surrealist nature that is worth paying attention to. It's not quite Dylan, but can be quite mindbending. Better yet is Ayers ability to create distinctive musical atmospheres. The are a slew of instruments included in the arrangements of this album including cello, celeste, melodica, Hawaiian guitar, mouth organ, and electronics along with the more conventional rock instrumentation.

A carnival atmosphere begins the album on "Joy Of A Toy Continued," a mostly instumental Soft Machine rewrite that doesn't really resemble its mother song much at all. "The Clarietta Rag" is a full fledged pop song that revises this bouncy feel. "Town Feeling," "The Lady Rachel," and "All This Crazy Gift Of Song" echo, but do not emulate, the acid drenched vibe of Barrett's solo performances. "Girl On A Swing" is truly haunting and provides some truely stirring psychedelic imagery. On Joy Of A Toy, Ayers is much more in control of his facilities than Syd Barrett's somewhat similar solo LPs, but Ayers trades in the mystery of Barrett's unhinged performances for a little more musicality and stability. As I stated before, The Soft Machine's presence is clearly heard and drummer Robert Wyatt provides most of the beats on this album. In fact the floating "Song For Insane Times" features the entire band, and might be considered a Soft Machine band as it contains the complete 1968-1969 line up (who never played together elsewhere as Hugh Hopper was Ayers' replacement).

I've often heard that Ayers is regarded as a bit of a musical slacker. This is hard to dispute on A Joy Of A Toy. The shorter compositions do not at all overstay their welcome, but still tend to rely mostly on a single groove. This becomes a problem on the longer songs. "Stop This Train" comes out on top due to its concept of train travel although the track does not reward close attention. "Oleh Oleh Bandu Bandong" unfortunately more than overstays its welcome. The different iterations of "Religious Experience/Singing A Song In The Morning" in the bonus section are musically pretty cool, but suffers from the fact that Ayers only bothered to write one verse of lyrics.

The bonus tracks here are extremely valuable, and add a considerable amount of music to this 2003 reissue. Among the different versions of "Religious Experience" is an early take that actually features Barrett on lead guitar. His part is slightly disjointed, and absent from the final single, but sounds a lot more together that Barrett's reputation suggests. Also present is "Soon Soon Soon," an album quality outtake and some interesting later versions of "The Lady Rachel."

Buy Me:
Kevin Ayers - Joy Of a Toy

I've been looking everywhere for this, thank you very much.

Thanks for making me aware of this great album, should be up there with Barrett's best.

Such a great album.Thanks!
Cheers from Athens Greece.