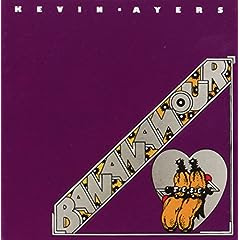 By the time of this release, Kevin Ayers had spent far more time as a solo artist than as part of the Soft Machine. The sound here still occassionally recalls that band, but there is a much more folky quality permeating much of this disc and the songwriting here is much stronger than his first solo recordings. Still, Ayers does not strive for any kind of unified vibe here. We find a psychedelic drone-fest along side an attempt to recreate a Stax Records sound. It's a little hit or miss, and probably less than the sum of its parts, but fortunately most of the parts are pretty strong. Production-wise, Bananamour recalls other albums of it's time, especially glam rockers like T. Rex and Ziggy Stardust-era Bowie, but Ayers sensibilities mostly remain in the 60's.

Ayers' for the most part does a fine job balancing his own psych-folk muse with concessions to glam rock and a singer-songwriter sound on Bananamour. The opening "Don't Let It Get You Down (For Rachel)" is a solidly constructed example with the core song very much recalls Carnaby Street pop, but the female vocals, watery guitar, and fluid bass guitar shift the vibe a little more into the 70's. Many of the best tracks here follow an acoustic template with perhaps a nod or two to contemporary sounds. "Shouting In A Bucket Blues" is a rolling number with great sad sack lyrics and a touch of glam guitar from Gong's Steve Hillage. Later we find "Oh! Wot A Dream" recalling some of Dylan's dream lyrics filtered through Ayers' Cambridge sensibilites and featuring a duck sound on the rhythm track. Although the Soft Machine is firmly in Ayers past, band alumni Mike Ratledge shows up on organ for the somewhat derivative "Interview" (although some strange dissonance and amusing lyrics save this sort of bluesy number), while Robert Wyatt provides harmony vocals to the lilting "Hymn."

The centerpiece and perhaps best track on the album is also somewhat of an anamoly. "Decadance" drones along with almost a kraut-rock vibe, with a bed of delayed guitars, droning analog synths (maybe these were borrowed from Gong too?), and mostly metronomic beats. It's by far the most psychedelic song on the album, and Ayers' absurdist lyrics completely match the music. There's an alternate mix of "Decadence" in the bonus section that is interesting for a comparison, but inferior to the album version and not essential.

The only misstep is the aforementioned Stax knockoff, "When Your Parents Go To Sleep." First off, bassist Archie Leggett gets the lead vocal instead of Ayers and this obscures much of the charm of Ayers' lyrics. The big problem is that the five minute track seriously disrupts the flow of the album, and probably would have been better as a B-side. This is not to say it's a bad song. There's a groovy horn section here and the rhythm section works hard to live up to an MGs sort of vibe. It would have been a great B-side, but sticks out like a sore thumb in the context of Bananamour. I'd probably enjoy "Interview" much more if this track did not precede it.

The album proper concludes with the majestically orchestrated, bad joke of a song (literally and intentionally) "Beware Of The Dog." It a silly track, but short and a perfect way for Ayers to end his album. It's kind of like Ayers' version of the Looney Tunes "T-That's All Folks" closer.

Excluding the alternate mix, the bonus tracks here reveal a unexpected obsession with tropical islands, reggae, and calypso. "Take Me To Tahiti" and "Carribean Moon" reference this directly in their titles while "Connie On A Rubber Band" is arranged with a reggae beat. All three are predictable breezy and make for an enjoyable sundrenched aural dessert after Bananamour.

Ayers' would soon depart Harvest Records to work out his prog-rock mojo on Island Records. Bananamour was an undeserved commercial flop and in fact Ayers would never experience any large scale success. This is unfortunate as Bananamour is a strong testament to his songwriting skills.

is possible reupload the link of this record? thanks & regards