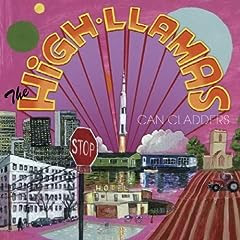 The High Llamas, which is basically short hand for producer/songwriter/vocalist Sean O'Hagan, have spent the last 15 years mostly recreating Brian Wilson's 1966-1969 sound (along with a touch of Steely Dan and electronic hints from their sibling band, Stereolab). O'Hagan is a pro at this style of production, and in fact has been consistantly pumping out quality product longer than Wilson himself ever managed. The problems have always been with the songwriting, which is nowhere near the levels of someone like Wilson or Steely Dan's Donald Fagan, and O'Hagan's voice, which is sort of a weak, reedy instrument.

Can Cladders, which is the first new Llamas disc in four years, fortunately takes steps to remedy both of these problems. Although the band started strong on Santa Barbara and Gideon Gaye, later 90's albums like Hawaii and Cold And Bouncy had a distinct focus on the instrumental production sound, and the songs seemed more like afterthoughts. 1999's Snowbug and 2003's Beet, Corn, And Maize tried to be more song-oriented, but just ended up kind of boring (I could never actually pay attention to Beet, Corn, and Maize). Buzzle Bee found a good balance, although it skimped on the string arrangements, but the new album is an improvement over even that disc. Can Cladders ties all the loose ends together and is the Llamas' best album.

O'Hagan will probably never be an A-list songwriter, but there are some catchy tunes here to match the gorgeous production. Songs like "The Old Spring Town," "Winter Day," "Honeytrop," and the title track have all been bouncing around in my head for the past few weeks. Previous Llamas maybe had only one or two songs to accomplish this feat. The instrumental tracks have been reduced here to three one-minute pleasant diversions as opposed to major album features. Long-time string arranger Marcus Holdaway also hits a home run here, as his creative string arrangements perfectly compliment the songs, and I think are in fact superior to those of his late-60's sunshine pop predecessors.

Lyrically, the album is about average. O'Hagan is fixated on surreal travelogues and Americana. He wants to be Smile-era Van Dyke Parks, but never achieves that level of wordplay. It's not really a problem though as folks don't really listen to this stuff for the lyrics, and they are much better than most of the Beach Boys' lyrics (Parks nonwithstanding).

The weak singing problem still remains. Although the melodies are much stronger, O'Hagan still sounds weak. But there are steps towards improvement. I imagine that he is fully aware of his own voice as most of the tracks are lathered with layers of female backing vocals and sometimes even lead lines. O'Hagan has long borrowed electronic sounds from Stereolab, but on Can Cladders he is also following through with the vocal sound (and I guess the Free Design too).

The High Llamas have always been a band better in theory than actual sound and listening enjoyment. I held off a little on buying this album because of this, but Can Cladders is in fact the first disc to really live up to the band's potential. It's a little surprising for a band to reach their peak this late in the game, but Sean O'Hagan has managed this, and I'm excited to hear the next album (which hopefully will not take another four years).

Buy Me:
The High Llamas - Can Cladders

nice review and i pretty much agree with everything you said. definitely their best album, the female voices are a nice addition to the Llamas' sound.

Haven´t heard this one yet, but I strongly disagree that Beet, maize and corn (not beet, corn and maize by the way) is a forgetable album. But if the new album is that much better, it has to be really something!