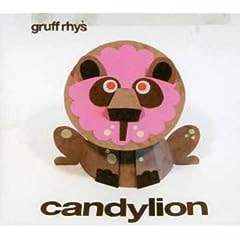 Gruff Rhys is the frontman for modern psych-popsters, the Super Furry Animals. This, his second solo album, is far more than a typical side project and actually features a sound notably different from his day job. Candylion is sort of a psych-folk project highlighted by some bubbling electronics and beats along with some electric guitar leads. There is also a pronounced Cambridge style influence (think Kevin Ayers) that is usually missing in the Super Furries catalog.

The album starts out with the aptly titled "This Is Only The Beginning" which is akin to the introduction tracks that tend to start off hip-hop albums. I find it a little disappointing as the track ends with a synth riff that I would have loved to have heard developed into a full song.

The song "Candylion" establishes the basic sound of the album with it's hazy folkish sound and surreal lyrics. Although very consistant in quality, the album suffers in that the style never strays too far away from this basic sound.

The songwriting is almost always fine ("Gyrru Gyrru Gyrru" leaves me a little cold), but the production, though sounding very hazily cool, eventually ends up also sounding very samey. Still, "The Court Of King Arthur," "Cycle Of Violence," and "Painting People Blue" are all great songs that establish Rhys as a strong solo creative force.

The Super Furries last album, Love Kraft, was partially recorded in Brazil, as were portions of Candylion. I was disappointed that the Brazillian influences didn't really seem to show through on Love Kraft. Fortunately, there is a little more to chew on. "Lonesome Words" and "Cycle Of Violence" in particular both have an awesome percussive bed as their foundation that evokes Brazillian percussion (even though it's basically the same percussive bed).

Unlike Rhys first solo album, Candylion is mostly sung in English. There is still one song sung in Rhys native Welsh, and a Spanish language track. Although Rhys lyrics are often surreal and interesting, his voice is his main asset and he seems to do well singing in any language.

Candylion ends with the 14 minute long "Skylon!," which is the detailed story of an airline hijacking. It sort of evokes Bob Dylan's long story songs, and the focus here is very much on the lyrics. In fact, the main riff and beat really doesn't change over the 14 minutes, and the song relies on sound effects, trippy overdubs, and additional percussion to remain musically interesting.

Although far from perfect, Candylion is a worthwhile detour from the Super Furry Animals more plugged-in sound. Although my quality rating here is a 3.5, I think that Candylion serves up an extremely smooth listening experience, and has ended up being played on my various sound systems more than some theoretically better albums. The cover art also makes me strangely happy.

another one: GRUFF RHYS - HOTEL SHAMPOO