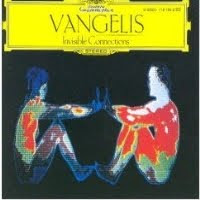 Vangelis went through the 80's best known for his blaring fanfares and creating records that sank deeper and deeper into flashy new age. This collection, however, is extremely ambient and an entirely different creature. Do not come to this album expecting any of Vangelis' trademark melodicism. The sounds of the mostly digital synthesizers are very representative of 80's technology, but Vangelis manages to use these tools in a very tasteful way. I'd be lying though if I say I didn't miss the analog opulence of his 70's work.

While the first half is pretty abstract, the second half of "Invisible Connections" is exactly what you would expect to hear walking into a planetarium around 1987. I mean this as a compliment as I thought planetariums were awesome as an elementary school student at that time. There are plenty of lush pads layered into the track and there were at least five moments where I thought the music was about to shift into the opening music of "Star Trek: The Next Generation." This works for me as well since I still like watching that show. The second two tracks, "Atom Blaster" and "Thermo Vision" are more like a digital update of what Vangelis was doing on Beauborg. I don't like them as much as Beauborg, nor are they as groovy as the opening track. I guess when you're trying to create chaos, the binary 0's and 1's of a digital instrument simply don't work as well as analog unpredictability. Still, both tracks are fine as background music to slowly drive you pleasantly insane.

I don't think that this is quite up to the standard of Vangelis' 70's work, especially when compared to the like-minded Beauborg, but this album is worth a listen for fans of this synth master. The second half of the title track is definitely a great one - it's just too bad that Vangelis couldn't keep my attention fixed quite as well for the other three quarters of the album.
Posted by Dr. Schluss at 9:38 AM

Thanks for sharing this.

ahh, thanks a lot man, it's been a while since I've been looking for this.

Ilike this place, thanks for keepin' it up.

Need To Boost Your ClickBank Traffic And Commissions?