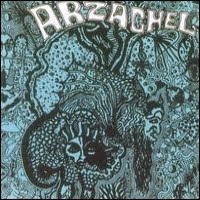 This is an interesting early effort from the soon-to-be members of Egg and 70's space guitar diety, Steve Hillage. Apparently, the musicians more or less threw this together from only a day in the studio, but the musicianship is at such a high level that it comes out sounding far more thought out than its origins imply. They'd also been playing gigs together a year or so earlier under the name Uriel. Still, for a lark this is pretty solid stuff. The music here is right on the cusp between 60's psych and prog, infused with the vibes of the Canterbury scene.

The album begins with several shorter form tracks, the best of which is the opening "Garden of Earthly Delights." It comes across very much like one of Traffic's better psych singles and the balance between Mont Cambell's psych-folk crooner vocals and Steve Hillage's happy, but never quite on key, singing is fun. You also get a pure blast of Hillage's lead guitar work at the end, although you'll find plenty of that on this LP. "Azathoth" starts out sounding like a more gothic Procol Harem before becoming far more unsettling near the end. "Queen St. Gang" and "Leg" are the lesser tracks, with the former being a pleasant but unassuming psych-jazz rocker and the latter sounding like a Cream outtake, although Hillage's attempt to nail a Jack Bruce-style vocal doesn't really hit the mark. This causes the band to de-evolve into insane echoing feedback for the last few minutes of the song.

Side two brings us two, long jammy tracks. The first one, "Clean Innocent Fun," carries on the Cream vibe, but with lots of organ. It's a little derivative, but I'd honestly rather listen to Hillage rip out wild leads on his guitar than Clapton, and the band works up a proto-punk head of steam that Cream was never able to do. "Metempsychosis" is the better of the long form tracks, with the band serving up a sixteen minute psychedelic freakout that would have captivated the heads at the UFO Club in the 60's. Yeah, they recycle a few tricks from early Floyd and the Soft Machine, but I think that these top-notch musicians are able to pull it off a little better (not that the Soft Machine didn't have top-notch musicians too - and the Floyd charming ones). Along with the album opening, this is the one that you need to hear.

Here at the Psychedelic Garage, I often get distracted by ambient and krautrock tangents, but if you need a dose of straight up, pure psychedelic rock, this is a pretty good album to shove into your earhole. It's got a couple of great songs in its grooves, and plenty of full on attacks from one of the better psychedelic guitarists around.
Posted by Dr. Schluss at 10:27 AM

can you please refresh my memory where the link is?

Currently, your memory is fine... the Doctor hasn't provided one.

The history's nice, though.

that's a relief. i though senility was starting to set in.

Rapidslug has gone from intermittent service to almost none at all here lately, presenting bogus "too many parallel downloads" and/or "download limit exceeded" messages after days of non-use. If they do not straighten out soon I for one am going to get a salt shaker and...

My friend, try the program JDownloader, which will do all the waiting for you.