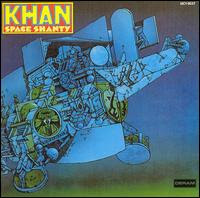 I've always let Steve Hillage be my primary constant for exploring the Canterbury scene, and the short lived band Khan is another very groovy step on his musical journey. This plays pretty much like a Steve Hillage solo album with Hillage handling the vast majority of the songwriting and most of the vocals. Of course I'd be remiss not to mention organist Dave Stewart, who also played with Hillage on the Arzachel album and never had any thing to do with the Eurythmics (that's a different guy). His organ playing is a perfect foil for Hillage's crystaline leads and he gets a few moments to shine on his own as well. The sound does recall a fair amount of Khan's jazzy prog peers, but I always appreciate Hillage's 'new age Jesus' vibe, and the production here is very crisp and meaty.

Truthfully, the band pretty much fits a comfortable jazz-rock groove and sits on it for most of the album. It all flows very well, but certainly doesn't come across as groundbreaking. Yeah, it sounds sort of like an early 70's Pink Floyd albums, but it has a more positive vibe than those titans of the album charts usually managed. Besides, Hillage's guitar playing makes Gilmour sound like an amateur (although a very passionate one), and Dave Stewart hit some precise organ runs that I don't recall hearing Rick Wright manage. I dig the vocal part of "Space Shanty," as it reminds me of Cheech and Chong's performance at the end of Up In Smoke. "Driving to Amsterdam" and "Hollow Stone" pretty much sound like the same Meddle outtake, but this is a band that you can pretty much just float downstream with anyway. I also dig the acoustic glaze that permeates "Stranded."

While this album gets a D- for originality, the quality of the performances, production, and songwriting make it worth a few listens. Steve Hillage fans especially need to check it out. You would probably be accurate by slapping a label on the front of this that says 'Generic Canterbury Album," but that's not necessarily a bad thing when you could end up with Grand Funk Railroad or the new Justin Beiber album instead.

Another good concoction from the Doctor.Thanks

By the way do you know Gomorrha?
If not look for I Turned To See Whose Voice It Was.
I think is a 4 out of 5 star and you may like it.
Ciao

What an amazing collection! Thanks so much. Fantastic Blog.

Thanks, Doc. You Rock!

Fantastic album and the first time I listened to Steve Hillage!

Really apreciate this one. Thank you very much!