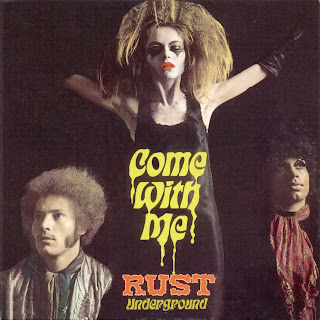 Although hailing from Germany, Rust definitely does not fit under the krautrock umbrella. This is full blown psychedelic garage rock in the vein of the Electric Prunes with a bit of British psychedelic production madness thrown in for good effect - it's very much in a 'summer of love' sort of mindset. I'd say early Traffic is another good comparison of the sounds found here. The performances are pretty top notch, but the real ace in the whole is the songwriting. Rust's tracks are extremely well written and pretty catchy overall. If these guys had been from the States or Britain two years earlier, I bet they would've become a major concern.

This album stays pretty strong throughout. My favorites include the west coast garage rock blasts of "You Thought You Has It Made" (complete with ridiculous vocals effects!) and "Delusion," while "Please Return" and the title track do the best job of going for that early Traffic vibe, and "Find A Hideaway" actually finds a very groovy balance between the Byrds, Love, and the Jefferson Airplane. It may be the best track here.

Despite the creepy, gothic, and somewhat terrible cover art, Come With Me is a pretty technicolour slab of psychedelic rock. Although it doesn't quite bat with the A-list, it certainly is undeserving of obscurity and plays better track-by-track than a typical album by the Electric Prunes or Chocolate Watchband (not to slight those still great bands).
Posted by Dr. Schluss at 11:14 AM


Sorry, made a mistake copying the link the first time!

DL link - how I wish you were here...kanske jag fått starr?

For some reason I can't comment on Damaged Tape's "Beyond the Astral Labyrinth." I just wanted to say that I'm really enjoying it right now, and that once I've listened through a few times, I'll leaves some more detailed comments.

Thanks! I don't know what's up. I'm even having trouble posting comments, and it's my blog!

I spent a few evenings drinking in a German disco with Rust. For the record, the band members were British and the drummer Del Coverley went on to drum for Clark Hutchinson. Those were the days and it is still a great record! Great blog, by the way.