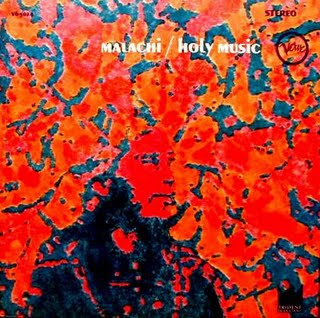 Here's an early example of an album attempting to run the ambient music sweepstakes. Malachi is a droning, acoustic affair that does manage to break some ground that groups like Arica would
later cultivate, but they unfortunately do it without much of a pulse. Still, there are some interesting musical moments and interestingly oddball instrumentation. To me this is basically a bunch of burnt-out, yet sometimes amusing beatniks trying to approximate the sounds heard from the temple stairs. If nothing else, it's a record that functions well as background music.

All of the tracks are entitled "Wednesday," followed by an ordinal numeral. The sound of the tracks tend to belay that uniform system of titling. We get a great deal of texture amongst the tracks, but not much of a sense of flow or discernible melodies. The music here is kind of static. The "Fourth" and "Fifth" compositions (confusingly tracks three and four on the album) almost dissolve into silence, with very minimal instrumentation defining them.

I keep trying to get myself to like this album, but I just feel like there's not quite enough there. There is the foundation for an awesome album present here, but to me it seems annoyingly incomplete. It's like the group laid out their building blocks, but neglected to actually do anything with them. Give it a listen and you may find some inspiration in the grooves that simply alludes me.