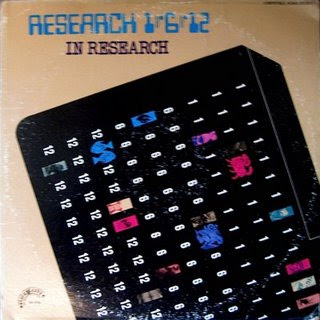 Here's a pretty schizophrenic band for your consideration. At times, they go for the full-on biking hard rock sound, yet then stick in spacey folk-rock songs or honky-tonk songs in between. They certainly get an "A" for diversity. They get a "C-" for album sequencing, however. Unlike the common flaw of front-loading an album, somehow Research managed to stick all of their better songs on side two, with the opening tracks being a little underwhelming. Maybe that's supposed to leave you with a good impression should you make it through the first half without turning it off. Just as a side note, the stereo separation here is particularly annoying, with the drums often hanging out isolated in the left channel. At least it's a pet peeve for me.

On side one we get the balls-out, biker schlock of "Can You Baby" and "Juicy." Those don't particularly manage to keep my attention, but. Neither does the 'old-timey' sounds of "Highway Song" and "The Grass is Greener." I'm down with older styles, and I still love to occasionally put on my Roots and Blues box set, but most of the 60's bands trying to go down that road made a grave mistake. Research is no exception. Fortunately, the side two tunes almost seem to be a completely different, and much better band. "Lip Smakin' Good" comes across like a hairy, freaky, and entertaining Rolling Stones parody. "Omar" is one of those minimalist, reverbed folk-rock tunes. It's like one of the quieter songs from the Jefferson Airplane's "Surrealistic Pillow" with a touch of Donovan thrown in. "The Feeling" is a fun acid rock anthem, and "I Don't Walk There No More" is a more straight faced Stones interpolation.

Do yourself a favor and skip straight to track five or six to give yourself a good impression of these guys. Then decide on your own what to make of side one. This is far from essential, but you never know when music grabs you the right way, and Research gets at least a sporting chance at doing so for you.
Posted by Dr. Schluss at 3:56 AM

Thanks. I have a few of their tracks and have always enjoyed them. Downloading now.

Thanks for this. I was hanging out in this abandoned house this summer, and there was an great collection of records decaying there. i picked one up that looked pretty cool by an artist named "Kyle." He was wearing a groovy hippie shirt on the cover. i decided against taking it, but i did get Can's okra album, one by Iron Butterfly and Nilsson's the point. I was wondering if you'd ever come across this fella named Kyle? album was probably late 60s early 70s.

Hi,
great blog. Is it possible to upload this album once again??
Thanks
Piet van Rosmalen
Netherlands

I have read several of your reviews so far and your a little strict when grading these artists, but I agree with you most of the times and I appreciate your reviews, thanks!

Any chance someone can re-share the album? I managed to find 7 songs off the album online, but would love to hear the rest