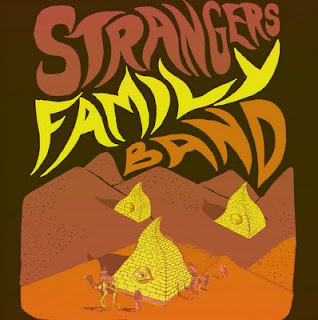 Strangers Family Band pretty much hit the nail on the head in term of psychedelic re-creationists. Other than a slight modern sheen in the recording quality, this is a pretty authentic sounding mix of the bad trip tone of the Doors mixed with some of the freaky garage rock punch of folks like the Chocolate Watchband and the Electric Prunes. I suppose they hit the Doors sound pretty hard, but when you get right down to it, not many bands really emulate the Doors, so I'll give the Strangers Family Band a pass (I really dig the Doors anyway). There are a few excursions into the twee-er sound of British psych as well, but that doesn't excite me quite as much.

Following an enjoyable ominous intro, "Girl I've Been Taken" serves up a slice of Nuggets-ready psych rock right from the outset with its groovy beat and chiming lead guitar. It's a fun example of 60's style 12-bar blues mangling. "Wooden Hands" goes straight for the Doors' sound, almost coming across like an unreleased track from "Morrison Hotel." For me, though, "Strange Transmission" and "Beware the Autumn People" are the main events. Both tracks use the Doors vibe once again as a basis, with "Strange Transmission" building into a fine freak-out jam, ad "Autumn Peopl" borrowing the "Five to One" stomp. "No One Sees Her" and "Tangerine" both have a 'Brian Jonestown Massacre getting really happy and going twee' sound. I'm not as enamored to those ditties, but they work well for what they are.

Strangers Family Band aren't particularly about innovations, but they are extremely accurate in appropriating the sounds of the 65-67 L.A. scene. I've always dug that meaty, produced sound (far more than the San Francisco bands of that era), so while the music here is a little derivative, it goes straight for my musical sweet spot. As a side note, this is technically an EP, but plenty of mid 60's L.A. bands put out 27 minute (or less) LPs, so this plays pretty well as a complete album.

hi there ! new address for mza-acid

This link did not work for me

ive seen this band a bunch, awesome florida guys, pick this shit up and see them when they come to your town! i think i read theyre playing some fest in mexico???

wow... singer is very jim morrison...good chit tho. Thx for the turn on! "moleseteban" your name is hilarious, nice 1.