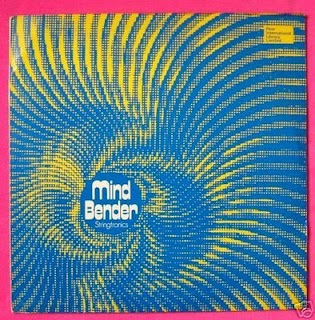 This is a bit of a depressing album, although well-constructed in a easy listening sort of way. You see, not only are these guys trading in psychedelic exploitation, but they're pretty late to the party. We must note that by 'Stringsonics,' these guys mean syrupy 101 Strings sort of orchestral gloss. There are a few guitars lurking about as well, but much of the album is devoted to the less inventive side of string arrangement. Even with this is mind, we'll give them a couple props for the wonderfully trippy, if ill-fitting, cover art.

"Mindbender" opens the album without doing anything of the sort. Still, this music is generally pretty non-offensive, never stretching into the truly saccharine except on the easily skipped "Freedom Road." At this point, you may wonder why I'm even bothering with the album (barring the cover art). While never plowing any new ground, there are a few hidden surprises on side two. "Dawn Mists," which actually closes side one manages an interestingly ominous vibe with its oddly delayed guitar harmonics. Then for the dumpster diving crowd, the stretch of "Afro-Samba," "Tropicola," and "Safari Park" actually manage some entertainingly funky sounds. The last two even make their way into David Axelrod territory, especially with their rhythm sections. That's a somewhat impressive feat.

So, this is no lost treasure. It will probably entertain those of you hip to the lounge scene, and there are a few surprises hiding in the deeper recesses of this album that may properly catch your attention.

thank you for sharing and for the honest assessment. i like the cover and the name, so i am going to check out anyway.

some good samples to be had!