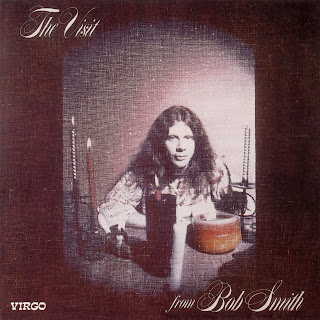 This album is a very ghostly visit from Bob Smith. On much of the album the music seems to draw together the various strains of west coast psych and folk rock, and then slathers it with reverb and hay production. Mr. Smith's voice also helps with his fine, expressive baritone. He often comes across as a far more chilled out Jim Morrison, complete with metaphysical hippy 'poetry.' The music itself manages quite a bit of variation, with some first rate guitar, fun touches such as vibraphones, and a truly groovy rhythm section. There must be a few samples lurking about in Maury Alexander's and Smith's production for those who have already cashed-out on David Axelrod's albums.

This albums starts of strong, with the first three tracks all making a positive impression. "Please's" bittersweet vibe and distant harmonies are custom for a documentary soundtrack where they cover one of those San Fran festivals with headbands and hippy moms breastfeeding. "Constructive Criticism" does the same before launching into a fun, full throttle acid-guitar and cheese organ groove. I'm sure at the time this music seemed about two years or so behind the times, but I'm willing to say that doesn't matter 40 years after the fact. I find that "Mobeda Dandelions" is a particular standout. It starts sounding much like a "Morrison Hotel" outtake before launching into a wild, almost krautrock-sounding rave-up. "Can't You Jump Rope" also catches my attention through some great interweaving guitar parts. The primary flaw here is really just another example of the double-album curse. The atonal plodding of "India Slumber" really disrupts the flow, and if you also cut the somewhat dull blues of "Source You Blues," you'd have an even better single album.

While there is some mild experimentation, "The Visit" doesn't do a whole lot that you haven't heard before. It is, however, a top rate encapsulation of some late 60's (especially West Coast) styles. With it's distinctively late 60's production and find performances throughtout, I find it's mostly a joy to listen to and a great, poppy psychedelic obscuritiy.
Posted by Dr. Schluss at 1:32 AM

This is really good. I didn't have any expectations, but I like it!

I once owned this album "back in the day". Probably picked it up in '71 or '72 during my "this looks interesting" phase, which also led to music by obscure bands such as Jake Jones and McKendree Spring. Good times indeed.

hey, I posted India Slumber on my psychedelic jukebox :)

Classic Underground Psych of the 70's a better D.R Hooker for me

If this LP got half as much attention back when we released in in '70, as it does now, we would have sold more.
I co-managed this group with my partners and got no real promotion from Kent Records.
David Axelrod did not produce this LP, Maury Alexander produced it along with Bob.

I still have sealed copies of this release packed away. I also have the acetate we recorded one day at Columbia Records that we used to shop this group.

Thanks for the comment, Steve! I didn't mean to suggest that Axelrod produced this, only that it would be a similarly good place to sample from. I'll re-word it to make it more clear.

I Happened to Play in the Band when Bob Reformed it.I was the Drummer. We recorded 2 Cd's worth of new stuff. Then Saddly Bob Passed away. It was a Great Time knowing Bob.

Any way to hear those two CD's worth of material? I'd love to give them a listen.

Make me an offer


http://img.photobucket.com/albums/v204/zbestwun2001/smith.jpg
Bob Smith and The Visit

Two are sealed copies one isn't. They are all on Kent Records, sorry no poster in the one that is open.

I'm selling one of my sealed copy of Bob Smith and The Visit's LP on Kent Records.

The auction ends in two days.

OK... I have the only acetate of Bob Smith and the Visit... she record we shopped for a deal. At That time the group was a 4 piece called Silverskin.
We did this acetate at Columbia Records in 1970 and shopped it around ending at Kent Records.

I was he Drummer on Bobs Last 2 CD recordings....all new music but the sad thing is He Passed on before releasing them........Some really cool stuff...dennisdudek at yahoo dot com