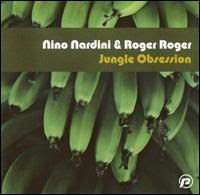 Before the advent of proper psychedelia, the lounge strain of exotica was arguably one of the better places to look for proto-psych sorts of sounds. Brian Wilson certainly understood this as he tried in vain to put together his psychedelic opus Smile in the mid 60's (obviously the modern finished product reflects this as well). This album is pretty late period exotica, and manages to incorporate a touch of later psychedelia and rock among its generally straight ahead exotica. Note that you'll probably need a love of lounge coming in, but with that in mind this is a pretty enjoyable album.

Many of the tracks here do have a distinct air of familiarity. I'm not sure if that's more from soundtracking use of this material or just from ripping off Martin Denny, but you probably won't have your mind blown. With a rum in juice in hand (well hopefully in a glass first), the groove of this album should become apparent. There's definitely a consistency of jungle-lounge sounds emanating from these French fellows, so I'll simply note that I tend to dig most the wah-wah guitar tracks of "The White Snake" and "Shere Khan," and the light funk of "Bali Girl" and "Tropical." "Mowgli" does a fine job of bouncing back some of the Smile-like sounds. I want to like some of the more mysterious tracks like "Murmuring Leaves" and "Creeping Danger," but I just keep waiting for the damn things to completely morph into "Quiet Village."

I've read a few articles branding this as a classic. I wouldn't go that far, but you're unlikely to find many 70's albums that nail the exotica vibe better than this one. Once again, I must stress that you'll be best off with a rum drink in hand for Jungle Obsession.
Posted by Dr. Schluss at 11:51 PM

happy blog and this enjoy....
Get More Details

This looks really cool - thanks!

You make some interesting references - smile actually, especially in the early fragmented version, sounds like a soundtrack album. It was pet sounds where he went into the exotica percussion , koto and such which, yeah, Martin Denny excells at - I just wish he was a little more musical-
sometimes you can get away with cover tunes - gary Macfarland for instance

This album is amazing. I just did a write up of it on my blog.