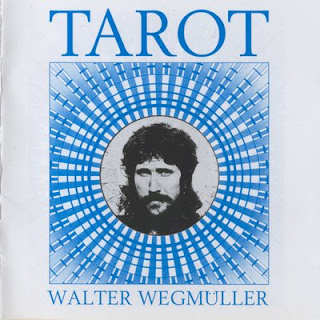 So this is where those low German grades in my middle and high school classes come back to haunt me. Walter Wegmuller was a Swiss mystic who stumbled into recording with the best psychedelic musicians in Germany, the core of which were the same fellows who made up the Cosmic Jokers. I must admit that I can't fully appreciate Wegmuller's contribution as the language barrier is firmly in place. That said, I do think his presence works out better than the similarly structured Sergius Golowin album. Wegmuller's German-language passages are typically restrained (although often heavily echoed) and the focus of the album often shifts to the Jokers. Musically, this is a krautrock epic version of throwing everything at the wall and seeing what sticks. I'd say that practically every facet of that genre circa 1973 is represented here, and they probably anticipated a few sounds as well. As a side note, I'm pretty sure that the titles reference various tarot cards, and I'd also be willing to infer that Wegmuller's spoken bits refer to those cards. Those of you that understand German will probably be able to wrap your brain around this album's concept in a way that the rest of us cannot. If anyone wants to post a few translations in the comments, I'd love to see them.

Making your way through this double album does require some effort, but you're sure to find several things that you enjoy here. For me the standout tracks are the deep space ones. After a questionable introductory track, "Der Magier' mainlines the listener directly into a magisterial nebula, Wegmuller's voice echoing through the cosmos, propelled by Manuel Gottschings echoing guitars and Klaus Schultze's analog synth madness. "Der Wagen" builds upon tribal-like rhythms, which is never a bad idea if you're looking for a rave up, which the musicians manage here with an intensity surely rivaling the Yardbirds - and with far more squealing electronic noises. Tracks like "Das Gluckstrand" and "Der Massigkeit" nicely channel early Tangerine Dream, but with more acid rock guitar and odd spoken word thrown in. While I wouldn't call it bad, I'm less partial to the more conventional rock blast of "Der Herrscher," the Hosianna Mantra vibe of "Der Hohepriester," and especially the slighly out of tune folk ramblings of "Der Teufel." Part of the charm of the album, however, is that these may very well turn out to be your favorite tracks as they tend to hit their musical targets, even if it's not one that I'd personally like to hear.

Although the presence of the star attraction is a bit of an oddity, Tarot pretty much serves as a primer for the prime years of krautrock. While this probably isn't going to overcome the double album curse for most people, you will find at least an album's worth of prime krautrock if you take the time to look for it. Once you've done that, feel free to allow the quality and trip-o-meters to notch all the way up to five.
Posted by Dr. Schluss at 11:20 PM

i love me some Krautrock. Thanks again.

BHWAAAA? A 4 outta 5 on the tripp-o-meter? Personally I think this is one of the most relentlessly acidy albums of the 70s -- so trippy it hurts at times -- mayhaps another listen is required?

oh I didn't see that note at the end; but anyway Der Herscherr rocks

You have a great blog. Thanks for all of the wonderful music!

thank you very much for your wonderful blog.

be assured that you are with the lucky ones not to really understand these ridiculous shot-my-brain-to-the-stars-like lyrics. no easy task for german speakers. (but we have less problems with english-speaking stupidity) enjoy the music!

I sent your articles links to all my contacts and they all love it including me.
psychic readings