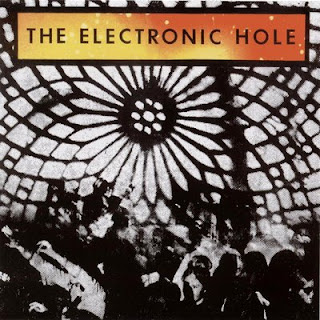 The Electronic Hole exists in a strange netherworld between Cosmic Michael-style endearing ineptitude and strangely effective, stuttering, trance-inducing folk-rock sounds. The main problem, or charm if you want to see it that way, is that the Electronic Hole's ambition tends to outstrip their playing abilities. Drums stumble, vocals waver off key, and the rhythm guitar tends to get a little distracted. On the more conventional songs, this doesn't work out very well. Fortunately, there are some longer, droning tracks which make for a far groovier listen.

My view on this album is that the songs under five minutes are pretty disposable, but the ones longer than that are worth a listen. "The Golden Hour Part IV" is like a distilled, sloppier "Venus in Furs" with a garage-band plunking bassline driving it along, while "Love Will Find A Way Part II" has a fuzzed-out minimalism that strikes me as a predecessor to the signature Spacemen 3 sound. "Love Will Find A Way Part III" is one of those raga rockers that tend to shoot straight for the sweet spot in my ear. Meanwhile, tracks like the opening "The Golden Hour Part I" test my patience a bit as we hear the band attempt a sunburst West Coast rock sound, yet the band can't play their instruments very well and their ability to stay in time with each other is even worse.

Although harbouring some serious flaws, the Electronic Hole's long player has at least half of a pretty hep album for you psychedelic junkies. Hey, that's all Love's "Da Capo" can lay claim to as well. Anyway, you can start the dirty jokes about the band's name... now.
Posted by Dr. Schluss at 10:32 AM

i really like this album. thank you so much for sharing. i think i found the lack of musical virtuosity not unexpected for the genre and time period so was not bothered. very nice album to listen to the whole way though....

a bit unfair...this LP is all the work of one man (also responisble for Beat Of The Earth and Relatively Clean Rivers) overdubbing all the instruments himself in a home studio. It was also recorded as a demo to attract potential band members and was never intended for release. I must admit I LOVE the flaws on this, but then I also love the band name and, oh dear, also I love side 2 of Da Capo... - P

i just stumbled across this one, hadnt listened to it in a couple years, it is always a little bit better than i remember. the opening tracks are strongest part, and i love the lyrics on the opening tracks, just a straight stream of LSD laden free association "gates of eden, gates of time, gates of neverending rhyme, yes i will yes i will yes i will find the golden hill" come on - that is unbeatable. I think the worst part is the sound quality, lots of detail gets lost in the lo-fi

"Love Will Find a Way Part II" is actually a cover of Frank Zappa's "Trouble Every Day" from the first MOI album Freak Out.

why this band never came up? why they dissapeared? they are mezmerizing!

Where can I find the lyrics of the cd?
Thanks in advance.