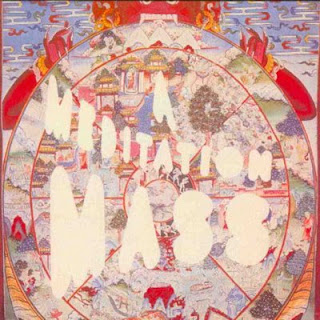 Here we have another one of those albums that you'll find pretty entertaining if you're already a fan of the genre (the Popol Vuh side of krautrock in this case), but it probably won't enter your top 20 list for said genre. This particular collection is a bit rear-loaded, with the prime cuts appearing on side two. If you're up for meditation, I'd probably recommend something else, but the music included here should still waft around nicely with your cheap incense.

These guys were too awesome for track names, so we're left with parts 1-4. "Part 1" loses eight points for including too much proto-new age flute, while "Part 2" is an ill advised attempt at lounge jazz. I suppose Quentin Tarentino could probably find some redemptive use for the latter, but the three minutes could have been better used on this album. "Part 3" starts to find a better sonic bearing as Yatha Sidra goes for more of a freak-out, complete with some reasonable acid rock guitar leads. The last part makes me think of a more 70's informed version of the early Pink Floyd track, "Nick's Boogie."

There's certainly enough here to temporarily fill that teutonic void in your heart. I wouldn't presume to put this in the same league as the Cosmic Jokers or the aforementioned Popol Vuh, though. This is more like the local leagues where they have the guy in a strange mascot suit come out at halftime and flail around.
Posted by Dr. Schluss at 11:01 AM

The 4 sweetest words in the English language?

when i first heard this album i was a bit disappointed because it had been really talked up, but once i took it for what it was...it is a very solid and highly listenable trip. just not spectacular. maybe just a bit too mellow. but thank you so much for sharing.

I have been looking for some info about Yatha Sidhra 1974 A Meditation Mass, and wow I have no idea that in the web were so many blogs related to generic viagra, but anyways, thanks for sharing your inputs and have a nice day.

Was that last comment a bot or a real person? It is becoming almost impossible to tell.

especially in times when no one was thinking about not sounding as new age or jazz lounge :)

flute is really the cool part of the whole thing!

well i liked it

I listen to this record a lot. Really resonates with me.