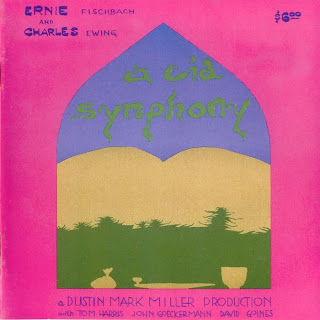 A Cid Symphony makes me think of if the Incredible String Band was naught from the British Isles, but instead a shack without electricity in Appalacia. And we'll assume that they had a large supply of the substance suggested in their name. The music is definitely back country folk, but with a lysergic air, hippy philosophy, and a rambling nature. I doubt anyone will enjoy every track here, but you will likely find a few here you enjoy on this sprawling triple album.

I would suggest skipping the yodeling and silence of the first two tracks, and go straight for Loudusphone 3, which is a kind of dulcimer drone. It entertaining blurs some kind of line between American and Indian (of the India variety) folk. Side two retains this sort of minimalist folk vibe and things don't really change much until we're presented with the vocals on Golden Gate Number 2, which works well as hippy folk. The vocals become a bit more prominent on the Noismakers section of the album, which also finds a little room for found sound. The final section of the album has plenty of half-assed beat-poetry ramblings (BS indeed), but "Scrambled Psychedelic BS 1"manages a bit of interesting freak-folk.

I'll be honest, this is far from my ideal of psychedelia. I'd say that these guys' aim is clear, but dulicmers and folk blues may not be the best path to producing a psychedelic opus. I do enjoy some of the more droning tracks, but I must admit that my favorite thing about this album is the cover art. Yet for those obsessed with the musical world of the 60's, this is a valuable time capsule, and truly a product of the era (says the fellow born in 1979).

Cool, thanks for this