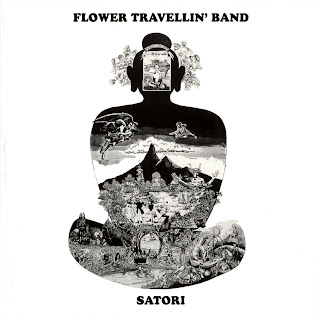 You're not going to do much better than this for vintage Japanese acid rock. Flower Travellin' Band is a name I've often head thrown around the psychedelic sphere, but I found that their albums often didn't rise up to my expectation. Satori fortunately justifies their reputation for acid rock gurus and leaves some change left over as well. This one gets just the right mix of psychedelia, Black Sabbath-style heavy metal, instrumental prowess, and odd flourishes of more traditional Japanese music. The only bad thing I'm going to call this album out on is the fact that the vocalist has a little trouble with that whole pitch thing. Maybe he was just REALLY wasted. The Japanese shy away from illegal drugs in general, but mushrooms were legal at the time and the country does have some awesome cold medicine. Anyway, the vocals are not enough to do any real damage to the music, and besides, most of this thing is balls-out instrumentals.

The tracks don't really have titles, but are presented as "Satori Parts 1-5." All of them are pretty awesome. Part 1 is a full blown sludgy riff rocker, with the vocals doing their best to hit that metal yelp. Next up is a psychedelic Bo Diddley-beat sporting cut with some great twin guitar leads. Part 3 picks up the speed for a rip-roaring instrumental, while Part 4 finds them working a Chicago blues groove (Part 4 is my least favorite, but some of you will love it). The final bit finds them returning to instrumental heavy metal, with a spaced-out vocal interlude. It also has some stoner metal leads that are trying to play koto parts. What fun!

On Satori, Flower Travellin' Band are fully communing with their muse. Their influences are easily spotted, but they manage to create a pretty singular sound from them. Let this be your musical diplomat from 70's Japan. This is top flight acid rock by any standards.

I love flower travellin band, thanks for posting this

Thanks for posting those music gems man. keep culture out there. THANKS!
Great Blog Great Music

umm okay i think i need to listen to this album.