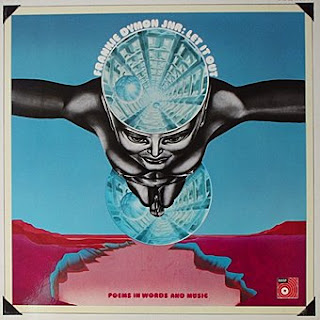 Let It Out is an interesting obscurity hailing from the Achim Reichel corner of the kraut-rock scene (Reichel often makes me think of a slightly crappier, yet still solid Cosmic Jokers). The star of the show is apparently a 'poet,' which is tag that I never really trust in the context of rock n' roll. He's a pretty entertaining dude, recalling the contagious, yet goofy sincerity of Cyrus Faryar on the Zodiac's Cosmic Sounds, and the odd pronouncements of William Shatner on his infamous albums (I think I mean this as a complement). Fortunately, Mr. Dymon is supported by some truly interesting musicians. The vibe is very different that what you might hear on a proper Achim Reichel disc, but it's no less well done.

"The City" is a nice funky start, and the pastoral sound of "Sylvia" is pleasant enough. The real fireworks begin with the kraut-blasting "Aftermyth." There are some screaming guitar lines and flute winding around each other before a creepy chorus and random percussion sounds back Dymon's pleading to his mama about smack and the sorry state of early 70's society. Then this
all shifts into orchestral backing. Yow! Side two manages some real hard-core funk with "Together Train" (it must be the funkiest Germanic players ever managed, although Can typically faked it pretty well). The rest of the disc is more of a comedown with lots of acoustic guitars, piano, and a couple organ tones. The last track is like Primal Scream doing the Stones with a stranger vocalist.

Yes, Let It Out is a horrifically pretentious album. But it's one of those things where it's been so overinflated that the eventually bursting is pretty amusing as well. I'd say this works out a lot better than, say, Sergius Golowin's spoken word/kraut-rock mismatch, which actually did have involvement from the Cosmic Jokers.
Posted by Dr. Schluss at 8:23 AM

Hmm, I've cooled off a wee bit after listening, have to say. This is actually Mysteryposter's rip. Which, alas, has an electric hum beneath the music. Would have been great to get a fresh and clean rip... Thanks anyway.

hey, I separated all the tracks and removed most of the noise. I can't really remove the clicks, though, without losing sound quality, but it's the best I could do:

Thanks a lot for the link raistuumum! Mr. Dymon comes across better with a bit of remastering.

Hey, the second link with the remastered version is only accesible for ten times... Could you reupload it please?

Mediafire shouldn't be a problem this time