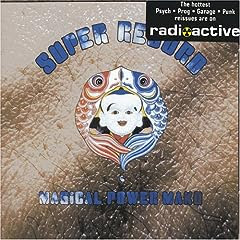 This is a pretty strange collection of tunes, but in comparison with Magical Power Mako's debut, Super Record is much more conventional. There's a lot of diversity with Mako trying out different world folk styles along with a few space rock freakouts. The album, however, doesn't veer off into musique concrete like the previously album does.

"Andromeda" comes across as a variant of the style of jamming that early Ash Ra Tempel employed. There are unique touches, though; especially in the way the midsection of the track seems to disintegrate and then reintegrate. I'd say that the name of the tracks is often a good pointer to the sound with "Tundra" having a positively icy sound and "Silk Road" having the sonic texture of a caravan (with an acid rock guitarist in tow) traversing the Gobi Desert. I guess "Woman in South Island" continues this mold if we consider that southern island to be part of India. It's probably worth mentioning that this album is almost entirely instrumental. There are some wordless vocals on "Pink Bitch," but that woman sounds half insane. The last four tracks of the album all have the same intro, but they don't seem to be a song suite. They do, however, continue the festival marching rhythms, with each track getting progressively stranger. The band amps up, threatening to dive into one last power freak out on the closing "Sound, Mother Earth," but they never quite get there.

Realistically, this is a far more listenable album than the debut. You can actually follow what's going on, but it doesn't make your jaw drop in disbelief quite as much. They stay pretty weird inside their more defined instrumental bounds, though. If you've exhausted your experimental kraut-rock outlets, Magical Power Mako is probably a logical next step for you.

hay, an actually good Jap album! I like how the last four songs kept reprising its intro.