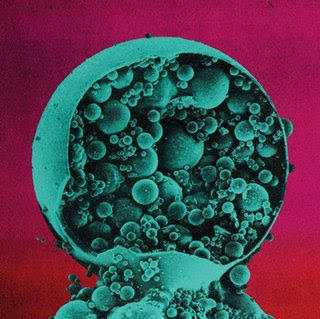 This is one of those album that pretty much caught my attention on the merits of the album cover alone. That eggy look is a little creepy, but the color treatment is very groovy. I suppose that's probably a fair assessment of the music as well. The sound here exists in some sort of state lingering between the guitar wildernesses of Deerhunter and 80's Sonic Youth, and the more metronomic side of kraut-rock, all punctuated with a touch of industrial noise. So, yeah, it kind of a dark, but strangely catch affair.

The first couple tracks are a pretty awesome intro with the alien landscape of the instrumental "Visitations" juxtaposing with "Liquid Memoryman," which kind of makes me think of the Butthole Surfers covering Can. Later, we get to visit a narcotic happyland, complete with chimes, on "Head Hang Low." It's like the 80's guilty pleasure pop hit of the apocalypse (turns out it's a Julian Cope cover; so I guess my reaction makes sense). There is some new wave spazziness present on "Comatone (Part One)," and "Respond in Silence" is like the electro version of the aforementioned Deerhunter. "Gamelan Mindscape" has some sounds that are probably intended to reprogram your brain, but it doesn't quite come off as well as I would like as it's throuwn up against a jerky Gang of Four-like groove. I'm always partial to the extended instrumental freak-out myself, and the closing "Visitation (Exit)" pretty well delivers on that. Although the Oscillation is a profoundly obscure act, the production here is very crisp and lively sounding.

While there is a lot here to impress, the Oscillation does have some growing room. As the many comparisons above may suggest, the band hasn't completely internalized its influences in the way that a classic band does. It's pretty well straight up on their sleeve. Additionally the band relies on a lot of grooves to propel their songs, and these sometimes flirt with cliches. Fortunately, there are typically a few wild-ass sound flying around in the mix as well. I'd be pretty curious to hear some future albums from these folks. If they can pull everything together a little tighter and find some original focus, they might manage greatness. They're just not quite there yet.