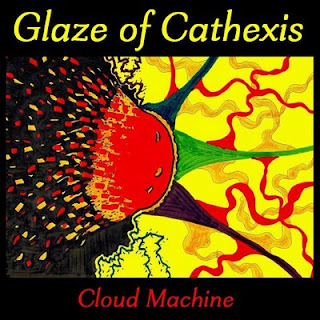 I haven't been recording much rock lately, but I'd like to share with you some recording that were left off of previous albums for various reasons. This isn't to suggest that the songs here are scraps. I'm actually quite happy with many of these tracks; they simply didn't fit on the previous albums. In fact, "Endless Sky" and "Running Into the Ground" are among the few Glaze of Cathexis songs that I've had the opportunity to play live. Many of these have a little more of a synth-pop/new wave vibe than the other albums do. "Mystery to Me" is still one of my favorite tracks with its blend of Talking Heads, Echo and the Bunnymen, and Television. The first two tracks seem to have unconsciously tapped into the early Cure sound. I could never really decide if instrumentals like "Cloud Machine" and "Voodoo Doctor" were destined to be Damaged Tape or Glaze of Cathexis tracks (until now of course). "Every Day" was supposed to be the closing track on Tokyo Rainbow Bridge, but I didn't notice the omission until the thing had already been released. "Something to Bend" was left off of The Holographic Universe because I felt like it had a similar vibe to "Frigid Season." I find "Never in Synch" and "Out of Step" slightly embarrassing for some reason, but not enough to keep them under wraps. I'd love to hear your comments about these tracks as I'm finally getting around to recording new Glaze of Cathexis material (check out Dr. Schluss' Best of 2008 for a little preview).

I'm not a specialist, to make a valuable critic, so I'll just say I liked the mood in this album (and the artwork too).
A little dark, but precisely I like it :) Stangely my favorite is maybe the less typical of the general mood : "something to bend".
I like the voice too, but I'll have to listen many times to understand the lyrics (english isn't my language)...
Very good :)

hELLO MR Schluss! You have very nice blog!
I want to ask you about William Basinski. What is it i cannot understand...

Well, I suppose the Basinski is music... very minimalist music.

Listening to this now. Nice stuff! The synth-pop influence is there, but there's a nice '60's tone running through, too. I like the vocals; they remind me a bit of the Marshmallow Overcoat.