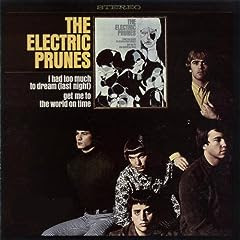 The Electric Prunes debut album is a sometimes amazing, but all too often frustrating hodge podge of several different styles. While the band is rightfully revered as one of the best psychedelic garage bands to appear in the 60's, I Had Too Much To Dream (Last Night) doesn't always play to the band's strengths. Along with some amazing psyche rockers, we get unfortunate attempts to include pop stylings and balladry that would at best be considered novelty numbers, and many could consider embarrassingly unlistenable.

But let's focus on the good news first. This LP is home to two of the best psychedelic singles ever released. The title track actually managed to make it to #11 on the charts and is a swirling buzz of garage perfection. Every instrument is utilized to amazing effect and the mood shifts between dreamy and a full-tilt fuzzy rocker effortlessly. If I had to explain psychedelic rock to an Neptunian, this would be one of my first plays. It's quintessential.

The follow-up single, "Get Me To The World On Time," is almost as good. While the track lacks the groovy mood shifts of the title tracks, it compensates with a gloriously twisted and distorted Bo Diddley beat. I have to admit that I think that this particular beat is generally overused, but here it works with the space-time ripping guitars and powerful vocals.

Actually the first side of the album holds up pretty well. There are a few lesser, but enjoyable rockers in "Bangles" and "Are You Loving Me More (But Enjoying It Less)". "Onie" is a slight almost bubblegum ballad, but is far from an embarrassment. Only "Sold To The Highest Bidder," featuring some out of place world-folky string instruments, bogs this side down. Unfortunately it's a masterpiece compared with some of the horrors on the second side.

Of course things start well with "Get Me To The World On Time," but then the band tries on some ill-fitting psychedelic pop affectations on the pop standard, "About A Quarter To Nine," and "The King Is In The Counting House," which is most notable for some wretch-inducing lyrics. Things get a little better on "Try Me On For Size," which is a little more of a rocker, but then the bottom falls out completely on "The Toonerville Trolley." It's one of those ultra twee vaudeville things, and really strokes your gag reflex. It's the aural equivilent of a train wreck. Anyone scouting this album out might want to stop the disc a track early.

The band is not completely to blame. Producer Dave Hasslinger, while proving to be quite a boon on the singles, was not nearly as adept at guiding the boys into genre other than nut-busting psychedelic garage rock. A similar gift and curse are the songs of Annette Tucker and Nancie Muntz. With Tucker co-writing six songs with Muntz (including the title track), and another two with Jill Jones (including the second single), their presence here is more than notable. Unfortunately, this team is also responsible for "The Tunerville Trolley." The band only logs in with two songs of their own, so they didn't seem to have their hand completely on the tiller at this point. Although very talented, The Electric Prunes are a band much better left in their garage psyche niche. They weren't really equipped for genre hopping.

While very far from a perfect set, I Had To Much To Dream (Last Night) is still an essential purchase for the psych fan. Although you'll probably want to avoid some of the dangerous water present here, you will be rewarded with two top-notch singles and several solid album tracks.

The recent reissue includes a few non-album singles, plus a few mono mixes of the proper album tracks. Both the new remastering and the liner notes are superior and marginalize the previous CD releases of the album.

Buy Me:
Too Much To Dream: The Original Group Recordings
Posted by Dr. Schluss at 10:15 PM

All - check out the Electric Prunes in concert, with Love (featuring Jerry Echols) and Jerry Miller of Grape! - 14 gigs in cities across US Aug 4 to 18th --

i think ur review of this album is a bit harsh. Some of the songs are just for fun. Toonerville Trolly's lyrics are making fun of old people(in particular- dad)and the vaudville bubblegum goofiness is being used in sorta an ironic sense.(Personally it made me laugh my ass off.)This is a great psych rock album. and u didnt even mention the song Olive.

i agree with too harsh - the prunes rock big time, all of their tunes are great, including their other albums. That doesn't include Just Another R & R Band which I haven't heard, and different musicians completely. At least Axelrod's 2 CDs used their vocals on both.