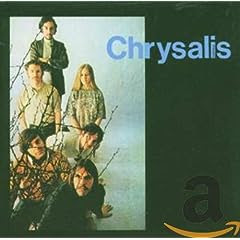 For those of us plunging through endless piles of esoterica, we often have to concentrate on the diamonds in the the rough found on otherwise unimpressive collections. With Chrysalis' Definition, however, we really do have a top-tier album of American psychedelia that has yet to recieve it's due.

Chrysalis was a university-incubated band hailing from Ithica, New York. They built up a local following, and armed with some praises from Frank Zappa's circle of cronies, set about making Definition in New York City. The making of the album was a rough road as the band went through several producers, including Zappa himself. Strangely enough the problem didn't reside with the typical "creative differences," but instead with the horribly abrasive attitude of the band's managers. Even with these issues, the finished album is a unified-sounding product.

The band's leader and almost exclusive songwriter was a strange fellow by the name of Spider Barbour. He is apparently best known as the subject of Frank Zappa's Lumpy Gravy, which is a shame as he was also an exceptional songwriter. The tracks on Definition create a very distinctive and detailed niche of psychedelic folk rock. Barbour references many different sounds, including San Francisco rock, British psych pop like Donovan and Pink Floyd, The Incredible String Band and Zappa, while creating an extremely distinctive sound. I've heard this disc likened to Zappa a bit too much. There are a few dashes of Zappa's vocal approach and instrumental flourishes on the opening track "What Will Become Of The Morning," and the closing Dr. Root's Garden employs some Zappa-style humor, but 98% percent of the time the band is most certainly doing their own thing. The almost unbearable melencholy of "Cynthia Gerome" and complete insanity of the bouncing "Baby Let Me Show You Where I Live" are wholly original.

Barbour's work as a lyricist is also of note. Many of the songs are in the form of stories, but remain conscious of word placement and sound for maximum effect. The imagery is quite strong, but avoids pretty much every cliche of psychedelic rock in 1967. Plenty of snippets of lyrics will bounce in your head long after listening. Barbour's voice is also of note, often lilting like a troubadour, but intimating some kind of hidden madness. This isn't to say I think Barbour was some sort of acid casualty as he always sounds completely in control and has a strong vision for his band.

Part of that vision includes a intensely trippy undercurrent of insect references. In fact it seems that songs like the aforementioned "Baby Let Me Show You Where I Live" and "Dr. Root's Garden" are written from an insect's perspective. In fact Barbour apparently eventually entered a career as an entomologist. The words are often a little unsettling, but always fascinating.

Every great band needs a secret weapon, and Chrysalis has two. Vocal Nancy Nairn comes across like an institutionalized Grace Slick and really tears the roof off of tracks like "April Grove" and "30 Popular." It makes me think a little of the Fiery Furnaces work almost 40 years later.

Also taking Chrysalis' music to the next level is percussionist Dahaud Shaar. His beats bring a lot of color and variety to the songs present here. While nothing here classifies as world music, Shaar seems to understand plenty of world rhythms and brings a touch of that to highlight, but not overwhelm the tracks.

The CD reissue includes eight bonus tracks, including six that don't appear on the album proper. The sound quality is a step down from the album, but seeing as such a great band has no other releases to their name, these still great tracks are invaluable. The writing and playing maintains the same amazing level of quality, even if thing get a little more hissy. According to the liner notes, Rev-Ola has plans to secure and release demo recordings for an aborted second album. I hope that these soon see the light of day.

Definition is truly a psychedelic classic. I would easily rate this with a "pick-up-as-soon-as-possible" status. Chrysalis were a completely original band with new ideas that still sounds innovative today.

Buy Me:
Chrysalis- Definition
Posted by Dr. Schluss at 11:35 AM

i thought of you sunday when i went to see "hot fuzz" because one of the songs in the film is the kinks' "village green preservation society". the movie actually has a lot of great music cues in it. also it's gory as fuck and just as funny.

Chrysalis is an amazing album. A lot of people think the keyboard at the end of "What will become of the morning" is a harpsichord, but it's actually a sped-up piano track.

April Grove could only have been written by a biologist in love with nature.

I actually had the pleasure of seeing Chrysalis perform at the Kleinart Gallery in Woodstock, N.Y. sometime early in 1968. Live, they sounded exactly like their album. And, I was totally straight, being only 15 years olde at the time!

(No bonus tracks, though)

I love this album so much, it will stay with me forever. Very special sounds...