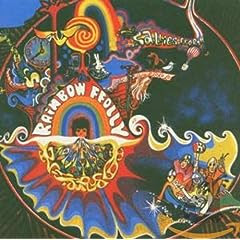 No, the double "f's" above are not a typo. This fleeting psych pop band from 1968 chose these strange looking words in honor of a British cartoonist named Wally Ffolks. Fortunately, and unlike many wacked out obscuro bands, these guys had the songwriting chops and atmospherics to shore up their nomenclature.

Sallies Fforth is the sole full length release from this band out of High Wycombe (can't say I know where that is, other than somewhere in England). The album is at heart a collection of demo recordings, and was put out as such by an impressed Parlophone. The only other existant track, included on the Rev-Ola CD, is a great non-LP single called "Go Girl."

The Rainbow Ffolly's musical style does stand out from the rest of the British psych-pop pack. Most bands of the era seemed to use Revolver-era Beatles, Syd Barrett, or the Yardbirds as their basic template to build a psychedelic sound. These guys seem to build their psychedelia more off of the folk-rock sound of Rubber Soul. The ballads in particular are in a distinctly McCartney-esque vein. In fact, there's a song present here called "Drive My Car," although strangely enough it's a completely different song than the Rubber Soul track of the same name.

On top of this template, the Ffolly throw on some well-done music hall touches and echo effects and then stitch the whole album together with some strange British humor and sound effect interludes. In fact the opening of the disc makes me think of the intro tracks often found on Hip-Hop albums, although markedly less funky and more British here.

Also pushing the Ffolly ahead is some great songwriting. There's not a bad song present on the album and most of it is first rate. "Drive My Car," "Hey You," "Sun Song," and "No" are phenomenal rockers. "No" benefits from a strange rubbery beat and fuzz bass, while "Drive My Car" is propulsed by a skiffle like rhythm. Even better are the ballads "Montgolfier" and "Goodbye." These have a bit of a Brazillian touch to my ear and feature perfect arrangements. The band manages some English music hall arrangements that don't come across as dorky-sounding on "I'm So Happy" and "They'm."

As mentioned earlier, Sallies Fforth is basically demo recordings. Parlophone rushed this album out much to the band's dismay. Although the recording is quite good, and much better than typical 60's demo quality, the folks in Rainbow Ffolly wanted to add some more overdubs to flesh the album out. I have to say that I'm glad Parlophone ran off with the unfinished album. I can see where the band might have added soome more stuff, but I think doing so would make Sallies Fforth far less distinctive. Many songs have a truly psychedelic, yet-sparse sound that I don't recall hearing many other places. At times it seems like a more together version of Syd Barrett's The Madcap Laughs.

Also of note is the tripped-out cover art. It was produced by the band and sort of makes me think of something a relatively talented high schooler would come up with. It's nicely representative of both the music insine and has a basic signifier of British psychedelia.

Those of us plunging through the depths of obscure psychedelia often have to sift through lots of dull or simply "ok" stuff to get to the real gems. Sallies Forth is the kind of disc that makes the searching worth it.

Buy Me:
Rainbow Ffolly- Sallies Fforth
Posted by Dr. Schluss at 11:24 AM

Love this album. Especially Montgolfier, which I first heard on Technicolor Web of Sound. Finds like this are what keep me interested in music. John

simply a milestone - one of the best
albums ever made!