Roger Nichols And The Small Circle Of Friends (1968) 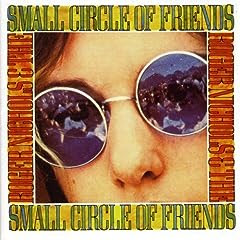 Sunshine pop does not necessarily equate to psychedelic as this 1968 release attests. It's an odd disc that often earns favorable comparisons to Pet Sounds but in the end remains pretty square. If Laurence Welk ever tried to bring out a rockin' group to show he was "hep and with it," these folks must have been on the top of his list. And if my grandmother could still hear, I'd have no problem playing this one for her. This is not the place to look for anything that would be considered experimentation, but the sound is as sundrenched as anything you'd expect from A&M Records and Herb Alpert's guidance in the 60's.

Even without any particularly new sounds, Roger Nichols And The Small Circle Of Friends is a high quality product that takes more attitude from the Sinatra dominated era of pop than the rock age. The arrangements here use a little bit of electricity and occasionally louder drums, but once the tight harmonies are in full effect, the songs tend to resemble a really good toothpaste commercial. The production is top flight and often has a dreamy sheen (hence the 1.5 on the Trip-O-Meter).

Roger Nichols carved out most of his career as a songwriter, penning Carpenters' hits such as "We've Only Just Begun" and "Rainy Days And Sundays." For a few years in the 60's he teamed with siblings Murray and Melinda MacLeod for a vocal duo that must have been in it's element in a slightly more upscale Holiday Inn lounge.

Fortunately on this album he cowrote four songs with Brian Wilson's Pet Sounds lyricist Tony Asher and the songs have a little more depth than I usually associate with such breezy pop. Still, don't expect anything close to the emotional whallop of Pet Sounds. There are a few more original numbers present, along with a slew of covers, including two Lennon/McCartney songs, two Lovin' Spoonful tracks, and one composition each from Burt Bacharach and Goffin/King. They do a pretty good job fitting all these songs into their signature sound, and I don't come off wishing that they'd included more original material. The Beatles songs in particular include a fine version of "With A Little Help From My Friends" (I certainly enjoy it more than Joe Cocker's version) and a rendition of "I'll Be Back" which includes and original and unexpected tag at the tail end of the song. In fact, it's my favorite moment on the album.

The Rev-Ola reissue includes 8 bonus tracks and makes a pretty nice addition to the set. We get two mono single versions of songs on the proper album while the other tracks are proper outtakes and obscure tracks. They maintain the consistancy of the album with the exception of the completely stupid "St. Bernie The Sno-Dog." But can one really expect much from a song with that title?

This is properly acknowledged as a sunshine pop classic, but don't expect any psychedelia here. The 5th Dimension sound like Captain Beefheart compared to these folks. But Roger Nichols And The Small Circle Of Friends is immaculately produced, almost sickeningly consistent, and is a good place to seek out the breezy A&M sound of the 60's.

Buy Me:
Roger Nichols And The Small Circle Of Friends
Posted by Dr. Schluss at 11:34 AM

Labels: Roger Nichols And The Small Circle Of Friends

Regarding Lawrence Welk being "hep":

Oh my; that'll give me some nightmare fodder for a while.

Not any more! Would be great if some one could re up this :)