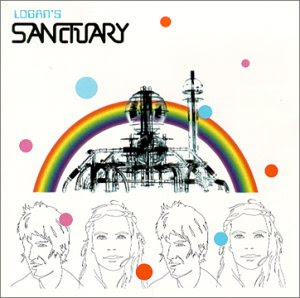 This album is the soundtrack for an imaginary sequel to the 70's campy sci-fi opus Logan's Run. Now, I'll go straight on record and say that Logan's Run belongs on the short list of my favorite movies. It's a masterpiece of cheezeball 70's futurist designs and Jerry Goldsmith's score remains one of the best electronic soundtracks even today (it's of course dated, but in a rarefied way). Roger Manning Jr., a major musical force in the early 90's pop-psych band Jellyfish and the relentlessly amusing Moog Cookbook would likely agree with this, and Logan's Sanctuary is a haven for goofy analog electronic sounds. It's worth noting that Manning does not try to recreate Goldsmith's sounds. In our hypothetical world, Logan's Sanctuary would have been the ultra low budget sequel with a significant downgrade in production values and the soundtrack budget. Fortunately, if the idea of a Logan's Run sequel (at least musically) is even slightly appealing to you, then the goofier sounds of this disc will not bother you. You'll of course note the name Brian Reitzell from the artist credits. I have to admit that I know little about him other than he was a drummer for the underground band Redd Kross. The drumming here, when present, is pretty groovy, so kudos to you too Mr. Reitzell.

I'm don't really feel like there is a standout or highlight track lurking about here, but almost everything is pretty high quality and certainly listenable. "Islands in the Sky" would open up our low budget, sci-fi potboiler, and it would be a perfect match if this movie actually existed. "Lara's Rainbow" recalls the band Air in one of their darker moments (I think both of these guys have done business with Air), while "Pleasure Dome 12 is sort of like Kraftwerk with orgasms. We also have "Escape," which comes across like an 8-bit ripoff of "Time" from Dark Side of the Moon. My favorite, though, is the widescreen, technicolor, electronic polyester suit sound of "Metropia." It packs the most instantly memorable melody of the album as well.While by no means bad, the sleaze pop of "Search for Tomorrow" doesn't quite hit the mark for me. But all 70's genre films need a vocal track of this sort, so at least Manning and Reitzell made the attempt. "The Silver Garden" throws in a little faux orchestration at the end that I probably could have lived without.

If you dig Logan's Run, Air, and/or something like the Moog Cookbook, you'll find plenty to enjoy here. It's a trip through the sleazy dives of a dystopian future that at least I find infinitely entertaining. It will make you wish that this movie actually existed, but that's probably not realistic. I know that Hollywood has been entertaining the idea of a Logan's Run remake, but like the Willy Wonka remake, they'd probably miss out on the groovy tone of the original for some lame CGI and 'authenticity' to the original source material (well, a movie hewing closer to the original novel of Logan's Run wouldn't necessarily be a bad thing, but I can't imagine that it would have the same insane charm).

Just to rant off subject a little bit, this album was released by the unfortunately now defunct Emperor Norton Records. This is one of the few labels (along with Impulse!, Blue Thumb, and Kompact) that drove me to buy anything I could find on the label. I guess you have to be a genre label in order to do that, and Emperor Norton specialized in freaky retro-electronica. Their biggest moment in the sun was probably the Lost in Translation soundtrack - another fine disc to track down.
Posted by Dr. Schluss at 12:14 AM

I'll definitely check these guys out, along with Logans Run. Thanks :)

thx for the logan's, looks innaresting.

Why this recording is not better known is one of life's little mysteries and while "concept album" territory can be a dangerous place for the unwary, these guys pull it off completely to the extent I at first thought "my gods, there was a Logan's Run' sequel I did not know about!".
Everything about the image/music/text is so well thought out and it is far more than the sum of it parts; listening to it generates a total feeling of immerision into Logan's universe.
Actually, now that I am over thirty, it isn't a universe I would now consider moving to ;)
If like the young Rachel you have not come across the delights of Logan's Run before, start with the film which is vastly superior to the TV series (and I speak as a seventies kid who sat transfixed to the screen when it was shown here in the UK on Saturday mornings if my addled memory serves).
Pure moog kosmische and the essence of psychedelic eletronica.

One good reason to get this is that Jason Falkner plays and sings on it.

Logan's Run is one of my favorite movies, and I am obsessed with synths... so I'm excited to hear this. Thanks for all the love put into the blog.