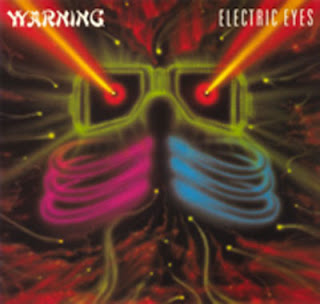 Here's an album that will give you nightmares. It's a distinctly early 80's synth pop affair, so it doesn't really fit into our regular 'psychedelic' heading, but it will certainly twirl a few of your brain cells. I've never been to a German bondage club, but I would expect that this album would make a fine soundtrack for that setting. Along with the icy-yet-still-very-analog synths, we get a vocalist who sounds like he really wanted to be in a death metal band, but was kicked out for sounding too much like a satanic Cookie Monster. There's also an occasional disturbing female vocalist chiming in.

The first two tracks on here pretty much give you a feel for the best of the album. "White Camels" is certainly a fun one with an introduction to our demented Cookie Monster vocalist, especially when the song's chorus attempts to brighten up the tone a bit but with no change in the growling vocals. "Dark Crystal" pummels the beat along nicely too and we get a taste of the really creepy female vocals. She comes out sounding sort of like Charlotte Gainsbourg in "Lemon Incest," which is a whole new can of worms in and of itself (the video of that song show pre-teen Charlotte in bed with her daddy Serge). "Journey to the Other Side" and "Night Crossing" start off with cool dark ambient sections in their first halves before devolving into crappy Euro-pop tracks.

Yeah, when all is said and done, this is a pretty disturbing album. It earns points for some sterling synth pop, proto-industrial sounds, and scary Cookie Monster vocals, but I don't think I'd really get caught listening to it too much. I'd call it a guilty pleasure, but it's too freakish for me to apply the word 'pleasure.' Delve in if you dare.

As a side note, this is the second album by Warning. The first one is supposedly just as insane, but features some large slabs of distorted guitar that are mostly absent on Electric Eyes.
Posted by Dr. Schluss at 11:31 PM

Their first one is here...

Thanks for the link! I don't really see myself giving Warning two posts.

my mind scrolled through a new dimension of salty fruitcakes when i injected this music into my cerebral groin.

Man, I love this album! It sounds like Nitzer Ebb if one of their roadies dropped some acid and started recording some vocals.

can you please repost or send me a link for this LP?
My e-mail is metallsta@yahoo.gr

Thank you very much
Efstathiou Stathis