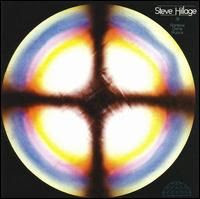 
I originally picked up this album with no knowledge of Steve Hillage or Gong. The cover art simply grabbed my attention, as did the title. Rainbow Dome Musick sounds like a psychedelic planetarium to me, which is very appealing to my sensibilities. Fortunately, that description fits the actual music quite well. While Steve Hillage's space rock albums may have had some clues towards this sound, Rainbow Dome Musick is worlds away from those earlier albums. This is an ambient chill out album, with sliding sequencers, watery noises, and glissando gliding guitars. 1979 may seem earlier for an ambient chill out album, but Alex Patterson of the Orb famously DJed his late 80's chill out room using this, and once it caught Hillage's attention, the guitarist ended up both working with the Orb and founding the fine electronic group System 7. It's not a stretch to say that this album is ground zero for an entire genre.

This is music that must be experienced - you will not find yourself humming it as you go down the street. As such, we are presented with two side long tracks. With Tibetian bells, spacey sequencers, Hillage's restrained guitar playing, and the sounds of flowing water, it's difficult to focus on these sounds. But that's the point. If these album clicks with you, it will likely shirft your brain into a more zen state. All I can say specifically is that I'm always disappointed hearing the ting-sha at the beginning of "Four Ever Rainbow" as that lets me know that the album is now half way over.

Those that read this blog regularly are probably aware that I have a soft spot for trance inducing records, and this is one of the best ones to come from a rock background (not that you'll find anything resembling rock here). I would go as far to say that this is one of the albums that got me motivated to start writing this blog. Why it took me three years to actually write about it is beyond me (probably laziness).

Note: The vinyl pressing of this is on clear vinyl. It looks awesome and fits the sounds found in its grooves.

7, right. I think I got my wires crossed since I used to play in a band called Rocket Number Nine (ironically, we sounded nothing at all like Sun Ra)

thank you for the marvellous post, i love gong and david aellen as one expatriated aussie muso should.
The musicianship here though is a snap above that i aspire too so i sit awestruck and impressed.
cheers

I'm checking out your 5 out of 5s. Very exited to hear what you find to be the best of psychedelic music.

Iirc, this was composed to be the soundtrack to the 1979 (?) Festival of Mind Body and Spirit. Available at the festival in transparent vinly for £1.25

Thanx Dr, Schluss for the Musick!

Listened to this earlier while out for a walk . . . track one must be pretty close to as blissed out as music gets.

I love this album, thanks to our blog. I've had some transcendental experiences with this one.