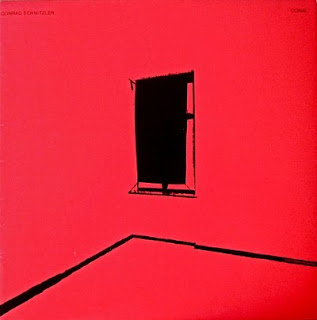 Conrad Schnitzler deserves a place among the krautrock royalty due to his early 70's work with major German groups like Kraftwerk and Kluster. By the early 80's timeframe of this album, Schnitzler was drifting deeper into the electronic ocean. He wasn't messing with the polysynths of that era as Conal seems to be the mostly (if not completely) the result of experimentation with a modular synthesizer. In fact, this would make a good alternate to the Logan's Run soundtrack as you're gliding through your peoplemover pod in the City of the Domes. This is very much in the line of something Morton Subotnick would've churned out in the late 60's. A positive contrast with some of the other 'bleepity-bloop' proto-electronica is the presence of some buzzing drones to ground the more liquid electronic sounds.

I suppose the idea here is to take the entire thing as a single, 40 minute piece, although we do get the divide in the middle to fit into the vinyl time contraits. With no traditional instruments present (and very little keyboard interface for the electronics), this is solid, otherworldly weirdness. There's not much diversity here, but if you gen zen you'll find plenty of varying textures. Fans of enjoyable primitive electronic music will find plenty to love here.
Posted by Dr. Schluss at 11:56 PM

thank you . Hard to find ... Beautiful to listen - Stimulating for a creative brain - Ciao Ale55

thank you for the conal album. exactly what i was looking for. psychedelic madness at its best.

A fine piece of work: thanks for the share!