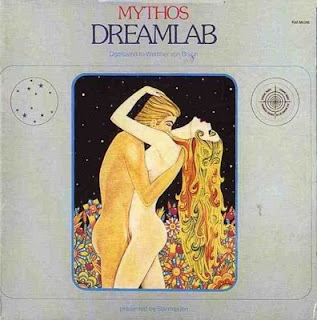 We don't see a whole lot of prog rock here at the psychedelic garage. I must admit that it has more than a little bit to do with my personal bias against prog. I've never really been able to enjoy a Yes or Emerson, Lake and Palmer album. I've had a little more luck with Caravan and King Crimson, but they still don't rank anywhere near my favorites. Yeah, I know that many see psychedelic rock and prog as kissing cousins, but the latter is missing a few of the elements that really make me dig the former. For one, I dig disorientation in my music. A lot of prog rock separates the instruments to a crystaline degree and the focus is often on instrumental prowess. I'm more into the strange blurring of instruments. I'm also a major proponent of drones and grooves, and I find that usually when a prog band stumbles into one of those they change it two seconds later.

Now, Mythos is a krautrock band, but there are certainly some prog-like elements at work here. For me it's a de-evolution in comparison with their first album. They often hit upon some truly awesome passages (and I'd say those bits actually surpass the previous album), but then some of the other parts make me think more of Jethro Tull, and that doesn't impress me as much.

So, let me point you straight to the parts that make me happy. The opening track, "Dedicated to Werner von Braun," is bloody awesome. For me it begs favorable comparisons with Ashra's "New Age of Earth" or "Blackouts." It rests on a nice delayed guitar pulse and produces one of those sonic clouds of blue smoke that always gets me going. If I end up as a rocket scientist when I grow up, I hope someone dedicates a similarly awesome track to me. "Message" fights the good fight for about three minutes, but then turns me of as it opts for a flute groove instead. This happens several times until about four minutes into the title track, when we once again get a few minutes of sonic opium.

I'll recommend this album for the prog fan, but it doesn't really hit the right buttons for me for three quarters of its running time. That last quarter flies into pristine spacey essence, however. If only they focused a bit more on that.
Posted by Dr. Schluss at 11:58 AM

I love this album ! Thank you very much !

Really thanks very much for sharing this great informaiton. Thanks for the share....