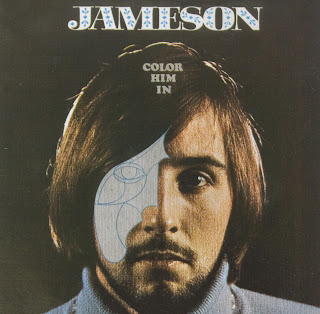 It's been a while since we got our fix of supreme psych/sunshine pop producer Curt Boettcher, but here's one where he serves as pinch hitter. Featured star Jameson is far from the best singer and his songwriting ranges from ok to somewhat embarrassing, but the real star of the show is the psychedelic production gauze slathered over most of the tracks. We get Boettcher's signature background vocal arrangements wafting through the mix, as well as occasional blasts of unidentifible backwards insanity. Even the lesser tracks end up with a production treatment or two well worth hearing.

"Jamie" is a fine opening track, and makes you think that Mr. Jameson may well be worth hearing. You may not think this anymore once you reach the blue-eyed soul caterwauling of "Right By My Side," but the tripped out vocals and fourth dimensional fade-out to the song should still hold your attention. Fortunately, we also come across tracks like the handclap-driven "Windows and Doors" and the truly weird "The New Age." Truthfully, the album does peter out in the second half as the lamer side of AM pop becomes more apparent, and the tweeness of "Candy Colored Dragon" leaves you cringing behind the couch. You'll still find the occasional production tweek to make a note of on your musical scorecard.

If the name 'Curt Boettcher' means nothing to you, by all means seek out the Millennium's "Begin," which also happens to be the very first post at the psychedelic garage. Those of you already indoctrinated will find a few pleasures here, although you'll also have to deal with Jameson's somewhat tuneless singing and half-assed songs. If only Curt kicked him out of the vocal booth then we'd really have something here.

Just a note to let you know that our 40th is now up and running. We've finally got around to adding a sidebar for your own band excursions, too. Sorry for the delay.
http://werelateforclass.blogspot.com/

You are, of course, welcomed to post #40 Another Collection, if you’d like. We’ve even made it easy by creating a page with codes to our animated artwork and MP3 players so your readers can hear ALL of both CDs (listening on YOUR blog, not redirected). There’s even some text if you don’t want to bother writing it up. Just copy and paste whatever you want. Naturally, we’d be VERY thankful. And, in the future, when our species comes to rule this planet, your name will be on the protected scrolls so that no harm will come to you...

As Always... Thanks,
We’re Late For Class
http://werelateforclass.blogspot.com/

There's a classic documentary made in the 60's called Mondo Hollywood, featuring Bobby Jameson as well as Bobby Beausoleil (playing a cupid, what knicknamed him later). He sings the bonus track of this very album. It is a very cool film and it was banned in France at that time.
Thanx

The link is dead, so there's a new: