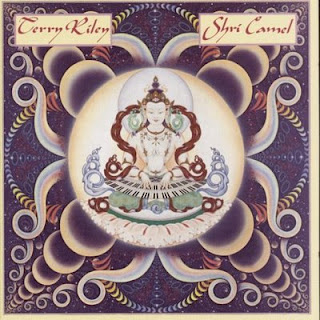 We have a soft spot for Terry Riley at the Psychedelic Garage. This album presents some of his more obscure recordings, but it's not for lack of quality. The basic framework here remains Riley's interlocking patterns or organ tones, but there is an attempt to meld his music with more eastern tones, especially those of the Indian variety. While it doesn't make any major stylistic changes, it's enough to distinguish this one from masterworks such as "In C" or "A Rainbow in Curved Air."

There are four tracks on this album, but I'd suggest that they probably fit in pairs. "Anthem of the Trinity" and "Across the Lake of the Ancient World" explore similar droning, lower level motifs more like what you'd hear with "In C." "Celestial Valley" and "Desert of Ice" tend to sparkle more and display more sonic relief. The eastern influence is subtle, but you'll hear it in small patches of melody wafting around through the lattuce of keyboard patterns. Riley also benefits here from clear studio production as all of the different threads of sound are distinguishable and clear.

I haven't heard anything by Riley that did not end up entrancing me and bring me back for multiple listens. This album is not exception. Yes, this music is technically minimalist, but there is a world of sound and infinite combinations available for the dedicated listener. You should hear this unless you simply have an absolute distaste for this tributary of music (yes, we are far from the mainstream).
Posted by Dr. Schluss at 10:46 PM

This is some great Riley here. Thanks for making it available!

Thanks for this - absolutely beautiful!

If you don't know it, the Harmony Rockets album Paralyzed Mind Of The Archangel Void would certainly salt your cracker, and be at home on your blog, too ...

many thanks! great music

New link can be found at a text file at
http://deerfile.com/5hsbyzh97he5