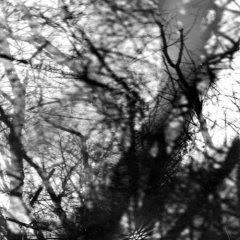 I have to admit that I've been listening to this one pretty obsessively over the past two months or so. Grouper is not really a band, but one Liz Harris hailing from Portland, Oregon. On the surface, Harris' approach is a terrible idea. The majority of the sounds of this album is simply her voice run through a phalanx of echoplexes, delays, and other assorted reverb units. The songs are almost impossible to distinguish from each other, and the whole damn thing runs together. Yet there is a steady hand over the proceedings and the end result is just short of genius. I don't think I've run across a recording quite this hypnotic this side of Paul Horn's Inside.

While I've given Way Their Crept quite a few listens, I still feel unqualified to make much comment on the songs. The first track almost has discernible lyrics, and then everything plunges down a deep well for the rest of the album. The variety comes only in the density of the sound that you are experiencing at a single moment. I have trouble coming up with positives to express in words, yet I really dig this. Once again, I feel that Paul Horn is the best comparison, but while his music holds a very tenuous grip with jazz, Grouper's music hold an equally tenuous grip with shoegazing sounds.

I rarely find myself so infatuated with music, yet also find myself without the means to express the reasons why. Maybe this album is like the sirens' song. You best lash yourself to a masthead before hitting play on this one.
Posted by Dr. Schluss at 8:30 AM

This really was a bizzare but rewarding listen. I'm beginning to see what you mean about how hypnotizing this record is.

If you find her new one, be sure to post it!