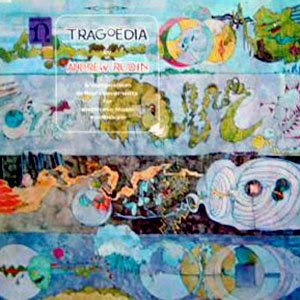 This has to be one of the first Moog recordings out there. Andrew Rudin is very much part of the classical, technique-oriented school of electronic music. There's a very self-serious photo on the back of my LP along with thoughtful ruminations of the music and a short bio which states that Rudin taught at the Philadelphia Music Academy. Tragoedia is of a kin with Morton Subotnick's works and likely casts a spiteful eye on the more playful recordings of something like Perry and Kingsley. Be that as it may, this is pretty much one of those 'bleeps and bloops' sort of albums, and sometimes I have trouble justifying that this is much different than me dicking around on my Minimoog for 37 minutes. But I suppose that it's much better organized than that, at least on paper.

We've got four tracks here ranging from five to fifteen minutes and there's a ton of explanation for them in the liner notes than I'm too lazy to read. In my proletarian assessment, I'd say skip side one and go straight for side two. "Hybris" has some cool resonate Moog sounds, but once again I can dial that in on the Minimoog in 12 seconds or less (granted few people could do that in 1967). Side two is far more interesting in my humble opinion. "Peitho" is kind of like an insane, electrified "Flight of the Bumblebee." Better is the fifteen minute "Ate" (the 'e' has an accent but I'm not smart enough to know how to type it). The liner notes say it is "the quality of utter ruin and desolation resulting from (the first three tracks)." With the benefit of hindsight, I'd say it's more of a primitive precursor to Tangerine Dream's early long-form meditations. It's like an extra-planetary excursion much like a track such as "Alpha Centauri."

For your first venture into early electronic composition, scroll down through this blog posthaste for Morton Subotnick's "Silver Apples of the Moon." You seasoned sonic adventurers might give this a try. The doctor's advice is to start with track three and zone out to track four. If the first two get your attention as well, then consider it icing on the cake.
Posted by Dr. Schluss at 8:08 AM

Thanks for the opportunity to get to know this - fascinating. I get your point about early electronic/moog music being easy to reproduce today, but it's what they did with the limited resources that makes it so interesting and, even, artistic.

I'm totally into Nic Raisevic/Pascal, so this looks good!

PS Do listen to the Harmony Rockets album if you haven't already.

early moog music was so academic...i have a hard time getting into it. so strange how quickly it went to scientific knob twiddling to bombastic prog rock. thank you for sharing.

When you learn how to type the accent, get back to me. thanks for the publicity. I have a CD coming out of even earlier Moog music. In fact, on that CD there'll be THE very first serious, large-scale original work made on a Moog Synth. At least according to Bob Moog.