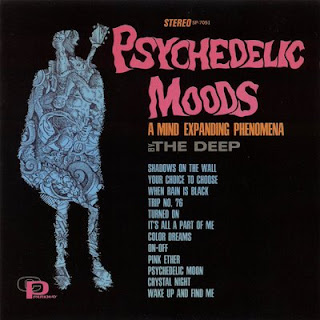 If you go by the cover, you'd probably guess that this is an early psychedelic exploitation album, and that would lead you off the mark. The Deep hailed from Philadelphia and did a fine job of assimilating the various strains of emerging psychedelic sounds. More notable, and what got my attention, is the fact that these guys seemed to have stumbled onto some of the Velvet Underground's signature sound a year before the first Velvet Underground (we're using VU from here on out) album appeared. Maybe the Deep hung out at Andy Warhol's happenings or something. Apparently, the leader of this band was one Rusty Evans. I believe he's responsible for the acid leads and songwriting. We'll credit him with psychic prescience as well.

"Color Dream" starts the album with a track that practically sounds like an outtake from the first VU album. "When Rain is Black" and "Shadows on the Wall" have a similar vibe to the VU's "Says" songs or third album in general. Then "Pink Ether" approximates the gothic vibe of something like "Venus in Furs." I guess it doesn't help that the Deep's main vocalist (Evans?) sings in a cadence remarkably similar to Lou Reed's. The truth is that I'm amazed by the VU comparisons, but we have tracks like "It's All a Part of Me" which comes across more like a garage hippy sing-a-long. Likewise, "Trip #76," probably the best known track here, is a very groovy psych-pop chant. "On Off -Off On" is more like Simon and Garfunkel on lots of amphetamines than the VU. I'd say the biggest freak out here is "Your Choice to Choose," which sounds like the 13 Floor Elevators playing backwards with Lou Reed ranting over it.

There are a few potential problems with the album, both of which you may be able to get around. First off is the tinny production sound. Listening to this straight through gives me a headache. The culprit may just be bad production (and there is a mono mix out there that I don't have as well), and one of the recent remasters may sound better. The lyrics also get psychedelically goofy. I can't defend the quality of the lyrics, but I will say that I quite enjoy them personally.

All in all, this is a album that deserves your ear. There is some solid, innovative, and obscure psychedelia at work here. And as you may have gleaned, there is a bonus jaw drop in store for those of you that groove to the Velvet Underground, especially since this album came out first.

dig the use of bells and timpani here

Dude, i love this. It sound like the soundtrack to some sort of out of control mid 60's acid parties. The kind that Kim fowley was talking about on the Trip. Totally groovy! Actual psychedelic garage rock!

Dude, you should check out the sequel to this album. Freak scene's psychedelic psoul. It's made by the same folk and it's quite awesome. A bit more trad psych in that electric prunes kinda way, but still pretty freakin' groovy!

kinda phony
kinda cash-in
kinda try-hard
but mostly kinda terrific because a genuine rock'n'roll heart beats in there somewhere and lasting entertainment value is the final authenticity
luv it!