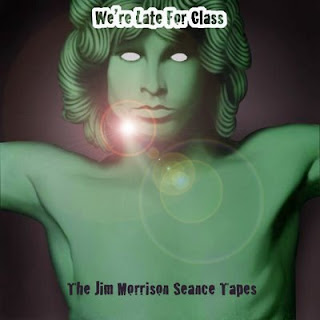 We're Late For Class is an internet-based psychedelic improv group which manages to deliver an unadulterated psychedelic maelstrom on their better recordings (there are 30 so far, so you have plenty to choose from). This latest release is fortunately one of their better ones, complete with the unwilling participation of the ghost of Jim Morrison; better known as some of the poetry readings that Jim did while about to slip of this mortal coil.

What we've got here is basically one 14-minute track... twice. I guess it's wise to pass along the non-Jim version, but it's the one with him that really works. The music here is simply a jam from college-related folks (students? professors? hard to tell). The musicians are clearly listening to each other well, but the entire 14-minutes is based on a repeating bass line. I have to say that I prefer something a little more free-form and without a net, but these guys pull it off about as well as anyone's going to. There are lots of weaving delayed and de-attacked guitars at work here, and it's a pretty hypnotic affair. On top of all of this we are treated to the strange rantings of Mr. Mojo Rising about indians and blood while an engineer occasionally chimes in to keep Jim on tracks ("How about the post-death stuff, man?). I have to admit that I'm a bit of a Doors junkie (they very well be my most listened-to band) and this does it for me. In fact, these folks do a better job with Jim's poetry reading than the Doors themselves did on An American Prayer. The second track is the Jim-less version. It's nice to listen to in order to hear exactly what the musicians are doing, but the magic is definitely on the first track.

A lot of people, myself included, are whoring away their music on the internet but this is one of the better ones I've come across (side note: if you've sent me your music and I haven't posted it, it doesn't necessarily mean that you suck; just that I'm busy). In fact, I'm a touch jealous of this band. The only real strike against them is the somewhat terrible band name; I really hope they change it because they deserve more than a novelty. Give them a listen... and, uh, me too.