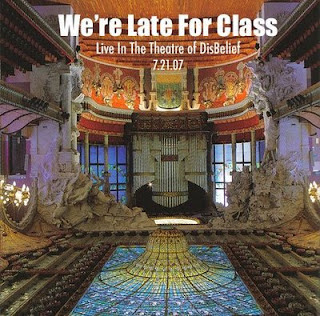 Digging through the archives of these internet psychedelic troubadours, I found this gem hanging out among the group's many recordings. At base a 32 minute collection of wild, improved psychedelic racket, this one presents itself as a pretty oddball concept album. Apparently, this is based on a random idea for a sci-fi television show whereupon a group of Star Trek-style explorers cavort about the galaxy searching for oddball radio waves out in space. This performance, therefore, would be an example of this interstellar noise. I'd say that the band pretty well achieved their goal.

Never truly coalescing, these sounds really seem to ride the strange waves that float through the emptiness of space. It's really hard for me to even make out what instruments I'm hearing, which is always a plus for me. This is a true tightrope walk of an improvisational performance, with no core holding the sound together and the musicians forced to plow further in their sonic exploration or fall apart. I'd say that 32 minutes is a pretty good run to hold together. Last year I reviewed the Pyramid album, which presented itself as a 1974 krautrock performance, although its authenticity was in question. This does not come with the krautrock label, but if it did I'd be pretty easily convinced that it was the real deal.

Live in the Theater of DisBelief is not comfortable music. It probes pretty deep into the unknown and will probably not be playing at your next dinner party (if it is, invite me). For those of you that like to hear the stranger end of those 'bleepy-bloopy' sounds, this should be right up your alley.

Hi Doc,
Thanks a million, not just for the space but for the time you took to decipher our noise. We appreciate the write ups and the insight. We're also grabbing "Glaze of Cathexis" (as we speak) from your stash of personal recordings to give a listen. We're always interested in the ramblings of twisted minds. We'll most certainly be back to poke around some of the amazing obscurities here. We may need some more hard drive space first. Many thanks again for the support and very kind words.
All the best.
WLFC