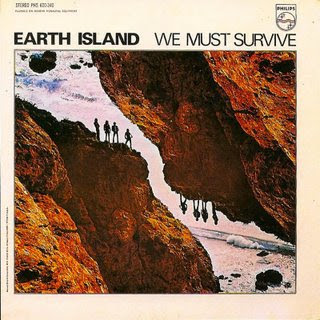 
We Must Survive is a sunshine psych gem that I had no prior knowledge about. The disc seems to date a little past the expiry date of the genre, but the sounds are definitely the real deal and recall the better moments of Curt Boettcher's and/or Gary Usher's love fest freak outs. There's a slight nod to prog here with some of the meatier instrumental parts, and I can't help but note the strong environmental awareness aspect that crops up here the very same year as the first Earth Day (I think). In fact, there seems to be a bit of a concept concerning that topic which ties the whole disc together.

As any good album should do, the opening tracks are winners. "Earth People's Park" takes a little of Brian Wilson's pocket symphony idea to heart with it's multiple sections, as does the somewhat harder rocking "Ride the Universe." Forsaking straight up lead vocals, most of the songs rely on a weave of harmonies that compare favorably with just about anyone else. The first bump in the road is probably with "This Island Earth," where the band unfortunately takes on the opportunity to sing the title in a ludicrously rising chorus. It might just be that images of the wonderfully cheesy movie of the same name are filtering through my head. Things get back on track with the ever-so-slightly morose "Doomsday Afternoon" (I'd expect something a little more hardcore with that title). Highlights later on the disc include the entertaining hippie nightmare, "Mother Earth Is a Beautiful Lover," which spins through both waltz time and a chilled version of a garage rock rave-up. A few of the references to Tin Pan Alley among the tracks don't really do it for me, but it comes across better to me than Harper's Bizarre doing similar affectations.

Finding really listenable sunshine pop can be a sometimes harrowing affair as you wade through endless oceans of saccharine sugar wads. Earth Island manages that tinge of melancholy that really takes the music to a higher level. It's not the absolute best in the genre, but I'd wager that it has more to offer than your average Spanky and Our Gang or Orpheus recording.
Posted by Dr. Schluss at 7:46 AM

hmm, I'm a bit suspicious since this is produced by Kim Fowley here

I didn't know this one either, but sadly, I only hear moderate generic soft-rock... I guess if you stretch it, this could appeal to Fading Yellow fans (like me). But for the record, the Trip-o-Meter rating seems oddly wrong for this particular entry.

Still, what an incredible selection you got there! Thanks for your ecclectics choices, always a plus!

Having this album since it was first relaesed I can tel you it's not for everone, but if you retreiv the mindset of the times it stands out from among the garbage as an audio trip through sonic purity