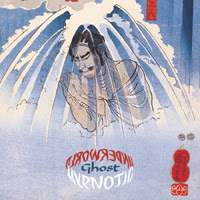 Not to be confused with the late 60's psychedelic obscurity of the same name, Ghost is part of Japan's psychedelic underground. Let me be straight with you. I lived in Japan for three years and found a good 90% of Japanese pop to be derivative crap. The upswing of this is that those who actually want to rebel do so extravagantly, and end up with some pretty wildly extreme music. Ghost does so with a quiet concentration for the most part, but the end result shows them to be pros at the sonic warping of reality.

This LP, which is among their best, splits not so evenly into two parts. The first, superior part is the four part title track. Starting with subtle percussion and delayed horns, the music really seems to take the plunge into the underworld, building up with intensity. "Escape and Lost Down in Medina" ups the voltage with relentlessly crescendoing drums and a repetitive plunk of the piano keys. Finally we reach bottom with the distorting guitars and choral vocals of "Aramaic Barbarous Dawn. It's a fine psych rocker that more than earns its keep.

The second part of the album is a lot more conventional, and is a touch disappointing to me. It still stocks up plenty of creativity, even if it lacks the white hot focus of the "Hypnotic Underground" suite. "Hazy Paradise" lives up to its name while "Piper" starts of drinking Japanese tea with Donovan (not a guest appearance) before making a fly-by a little closer to jam band territory without quite succumbing to that sound. The ten minute "Ganagmanag" lands right smack in the middle of jam band land, which they do as tastefully as possible, but for me is still quite a comedown from the better parts of the album. Those tendencies do tend to slightly mar the second half of the album in general, even though the root songwriting and performances remain generally strong.

Although cursed with a need to stretch things out a touch longer than necessary, Ghost's high points on Hypnotic Underground are worth the trouble. The musicianship creates a sonic tapestry where no one musician ends up as the star of the show, but instead shows us a united front of psychedelic weirdos. Some of the music here is the best psychedelia that modern Japan has to offer.

ehh, this is the only album in this update that I really got into, though the first and fourth parts of the hypnotic underground are prime crap

Further exploration of these Guys/Gals' recordings could prove fruitful. I don't know Temple Stone, but am pretty well versed in their others. LamaRabiRabi (sp?) is a solid folk/psych album from start to finish; their self-titled, while a little nebulous at times, is also good. I'd be curious to find out how their most recent one "In Stormy Nights" holds up for folks out there...
Thanks again Doc for your continued efforts. I couldn't be more grateful for the music ...