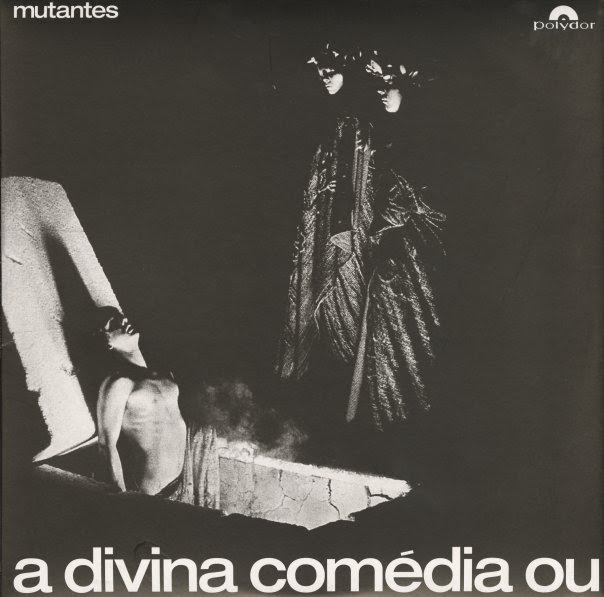 On this, Os Mutantes' third album, we hear a somewhat different band than what was on their debut. Sure, the core members of Rita Lee and the Baptista brothers are still in place, but there are some major aesthetic differences. By this time the tropicalia movement had petered out, and this album, while still plenty strange, is not quite as experimental and crazed as their debut. We won't hold this against them, however, as many of the major players of tropicalia were being jailed, exiled, or worse under the military dictatorship ruling Brazil at that time. As such, the Brazilian songwriting pool must have been much smaller, and Os Mutantes rely on their own formidable songwriting skills.

There is much more focus on the band's instrumental skill as the studio trickery and oddball arrangement are somewhat reduced here (although far from absent). Sergio Baptista is a phenomenal guitar player, and Arnaldo is similarly fine on the drums, and there is a lot more focus on the playing here. The bass lines also rock my balls, but I'm not sure who is responsible for that particular instrument here.

Although pening with the great, tropical psych rocker "Ando Meio Desligado," Os Mutantes
saved the full punch for the next two tracks. "Quem Tem Medo de Brincar de Amor" is a wild, completely insane sounding rocker punctuated by a slide whistle and some awesome stop-start rhythms. It probably stands as my favorite single Mutantes song. Next, "Ave Lucifer" returns to the sound of studio weirdness with inverted, underwater sounding percussive guitar and some orchestration near the end.

From here the album runs a little more along the lines of well-played acid rock. Unfortunately, that is to say it doesn't stand out as much, although it's certainly still well constructed. The are still some nice surprises like the sound effects on "Chao de Estrelas," the choir on "Haleluia," and the full scale sonic blastout ending the album on the last minute of the otherwise chill instrumental "Oh! Mulher Infiel."

Like the first album, the middle of the album has a bit of drag. The bluesy "Meu Refrigerdor Nao Funciona" runs about three minutes too long (although you do get to hear Ms. Lee sing in English), and the doo-wop of "Hey Boy" sets off my cheese alarm. Still, none of these problems are major enough to avoid this album. It is the last of the classic Mutantes albums for many folks.

hi dr. schluss,
i'm from brazil and first i'd like to thank you for all the great things i've found here, from "dreamies" to "tomorrow".
well, about "divina comédia" [mutantes], arnaldo plays piano mainly, the drummer is dinho and the bass player is liminha.
i've got a band of my own [TECLAS PRETAS], very influenced by mutantes and 60s psychedelia. if you want to give it a try, here it is

Thanks for the note and the link! Sometimes Mutantes info is a little difficult to come by for us Yankees!

Info is difficult to come by indeed. Yes, I would guess as much. Dr. Schluss, may I offer you some insight regarding this album. If on their debut album, Mutantes played with drummer Dirceu, from Gilberto Gil's band, by the second album, they already had they're own drummer, Dinho (aka Ronaldo Leme). By this, their third album, Arnaldo is giving more atention to the keyboards, then bass so the band has contracted Liminha (aka Arnolpho Lima) for occational bass playing funcions. Both of them, Dinho and Liminha would within the year become official members, appearing as such on their folowing album Jardim Eletrico (Electric Garden).
Anyway, on this, the Divina Comedia album, Arnaldo plays bass on Ando Meio Desligado. This song was actually inspired by the bass line of Time of Season by the Zombies. If you listen carefull, you will immediatly notice the resemblance. Of course, the song Ando Meio Desligado goes in a completly different direction.

Arnaldo in interview makes it a point to say that he played bass on most of this album, although you can tell the difference in style on some songs. Quem Tem Medo de Brincar de Amor certainly sounds like Liminha, not Arnaldo. And I have video footage of them in 1970 where you can actually see Liminha in the background behind Arnaldo playing. Preciso Urgentemenet Encontrar Um Amigo is another song where the bass sounds more like Liminha then Arnaldo. This song by the way is a brazilian classic rocker from Roberto Carlos, Brazils equivalent to Elvis Presley in the sense that people started to really turn on to rock, use rock related slang, grow their hair and use hippie cloths because of Roberto Carlos strong carisma and sex appeal. Plus he can sing well too. It is fair to say, that Mutantes really recorded a masterpiece here, because they took the song and made it a whole lot raunchier. Chão de Estrelas is an old timers song. This song caused alot of rage with the elders. It's like the Monkees recording Al Jolson or Guy Lambardo or something and making fun out of it. It's a joke that if nothing else, draw a thicker line of seperation between generations, old and new, something very much part of the era both here and there. With that in mind I invite you to listen to it again and verify how outrageous and corageous they were in doing that. Pissing older people off during a military dictatorship isn't always good for one's physical health.

Meu Refrigerador Não Funciona (My Refigerator Doesn't Work) is just a joke on hard blues with a Rita Lee playing a demented Janis Joplin in heat. But if you take away the voices you have an awsome band playing some viceral blues, both Arnaldo on keyboards and Liminha on bass. It was done live in the studio, from what has been written about those sessions, all recorded by the end of 1969.
Anyway, I hope I didn't get too carried away on the subject and the info can be appreciated. Please check out the other albums, you'll find them all very intresting, each somewhat different then the last. That's it, I'm outta here. Bye.

Thanks for all the info! It's nice to be able to read all the after the review. I simply don't have a lot of Mutantes info (or I didn't). I'll definitely be reviewing the second album someday, but it's sitting in a box in my parents house right now, so maybe next spring.