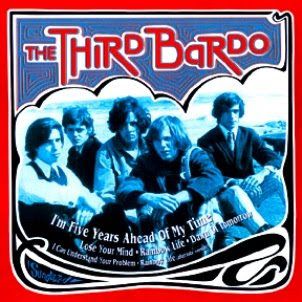 I've always considered The Third Bardo's "I'm Five Years Ahead Of My Time" to be one of the absolute highlights of the Nuggets box. It has an odd, ranting insanity that I love, and has gotten some modern acknowledgement by way of a not-too-bad cover from Primal Scream a few years back. Alas, The Third Bardo is the very definition of a one-hit-wonder (although I suppose they were missing the actual hit) and never found the opportunity to record a proper album. Here we have a short collection of their few other recordings along with their moment of demented glory.

The B-side of "I'm Five Years Ahead Of My Time" is "Rainbow Life." It's got nice, trippy squiggly guitar, but it doesn't really grab you by the nuts the way the A-side does. I'm sure no one had trouble figuring out which side to play, although I don't think many DJs played either side.

There are a few remaining tracks that unfortunately fail to distinguish themselves much. "Dawn Of Tomorrow" is a pleasant, but forgettable rocker that seems to be drifting over into R&B while "Lose Your Mind" recycles the "Five Years Ahead Of My Time Riff" while severely suffering from the Law Of Diminishing Returns. Then there's a demo-quality "I Can Understand Your Problem" which sounds about like what you'd expect from a demo.

The Third Bardo's moment in the sun had left me thirsting to hear more of them for about ten years. I have to admit that I was more than a little dissappointed by the big reveal, but sometimes a one single band really was a one single band. Still, you very well may be curious as I was. So, listen, listen...

Doc:
Excellent write-up on Third Bardo. I felt as impressed as you did after hearing "5 Years" off the Nuggets box, and felt similarly disappointed with the other tunes, although I may have enjoyed "Rainbow Life " slightly more than you did. I think if one likes "5 Years," though, listening to the rest is mandatory, as it's the only recordings these guys ever made, which is a shame-- they could been contenders.
BTW, Monster Magnet did an excellent cover of "5 Years," too, with a little more muscle (as should be expected) than Primal Scream. I believe it can be downloaded for free at their website.
Thanks again for the post and the great write-up.

My 1993 EP vinyl doesn't have the full set. Have heard 'Rainbow Life' on Myspace and i'm prob with 'Gordon' on that one.

Oh Doc PLEEEZE can you re-up this.
Can't find the full set anywhere except 1 torrent with no seeds/leeches !!

many thanks if pos.