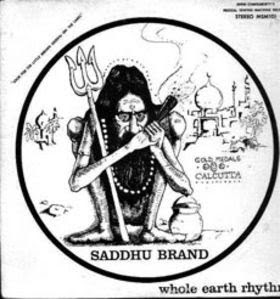 This is what happens when you get four hippies back in San Francisco after a four year layover in India. Sounding strangely burnt out yet happy, the songsters of Saddhu Brand stick exclusively to traditional Indian instruments and vocals. The vocals come in two variety: the strangely unemotional sounding female chorale vocals and the voice of one addled guru sort of fellow by the name of Peter Van Gelder (from Great Society).

In many ways, this disc makes me think of a weird transmutation of the British freak-folk scene. There's a kind of Incredible String Band vibe here, although this band has a different set of acoustic instruments and they're nowhere near as talented as the ISB. I have trouble giving this one too high of a quality score, but I do find this album highly entertaining. They pretty much show their entire sonic hand on the opening title track and proceed to plumb it for all it's worth.

The whole affair reeks of patchouli (or may let's say Nag Champa, I hate patchouli), but what we have here is for the most part is a typical San Fran band thrown through a Hindu blender. "People Brittle" would easily translate to a later period Jefferson Airplane song with electric Western instruments, and "I Give You Johnee The Truth" is only one step removed from sounding like West Coast "cowboy" music like New Riders Of The Purple Sage. Just get a different singer and ditch the flute and sitar. Of course the charm of this albums is that it does have the aforementioned flute and sitar.

On the longer tracks "Babu Shoda" and "Dabi Das' Song" the band tries their hand at more authentic Indian style compositions. It's not going to stand in my way if I'm reaching for a Ravi Shankar record, but it's enjoyable enough. While they do whip up a wild dervish sort of sound on the later track, it's far muddier and less precise than something similar that the Indian masters would concoct.

Whole Earth Rhythm threatens to confirm more than one cliche concerning the late 60's. If you can stomach that and enjoy Indian instrumentation, you'll probably find something to enjoy. I apologize for the low bit rate (@128). Usually I can't stand that rate, but this one still sounds pretty good. I found this one on the Lost-In-Tyme blog.
Posted by Dr. Schluss at 10:07 AM

DR. i can't find any download links that work for this. E.

You've got to highlight the link past the comment window. Then the link will work.

thanks so much for your blog, really enjoying it and this album is great, keep it up !

Hey, that man you mentioned, Peter van Gelder? Well, he's my daddy. No, really, he is my father. And yeah, it was the quintessential hippie scene, let me tell you from first hand experience! The funny thing is, my dad never stopped studying and playing sitar, and he's one of the greats now. Perhaps still not likely to oust Ravi from your playlist, but I think if you enjoy classical Indian music you would be amazed to hear that it was some old white guy jamming on his sitar. Well, practicing on average eight hours a day for over forty years has got to be worth something, I suppose!

Anyway, thanks for posting this, it was cool to see Saddhu Brand mentioned. I just found out someone actually reissued their album at some point, and now I'm off to see what else Google delivers!

I'm a sucker for sitars. If you could point me in the direction of more recordings I'd love to hear them.

Funny to see another daughter here! I am Ken Wilson's daughter (Esraj and flute)... I was so excited to see this online! Thanks for posting :)

Oh no it's not true, it's still green and blue ...
Who wrote that?
Helped me through many difficult times since 1971.
Thank you.

Probably inspired by this Hindi movie song from 1965
http://youtu.be/tVKxS9qmn5E?t=45s

I LOVE this album so much. And the words are simply beautiful. "there's no more room for profit and doom, but there might be time for rhythm and rhyme...". I play the whole album regularly on my radio show The Quest, on noncommercial WPKN in Bridgeport, CT, and streaming at wpkn.org. We are a totally self-owned listener supported station just like the good old days. I found this on the shelf randomly and it has been a part of me ever since. Thank you!

English folk meets India and wins? It's not psych, it's not rock'n'roll, it's not progressive, it is unique, it is wonderful, if you are on its wavelength.