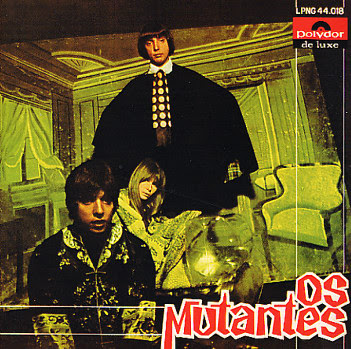 Even at it's best, world pop often sounds like it using too many western (read American and British) sonic ideas, and fails to have much ethnic identity. Brazilian pop has always been a happy exception to this rule with distinctive percussion, melodies, and touches of bossa nova and samba making this music quite distinctive. This was never more true than with the tropicalia movement of the late 1960's, of which Os Mutantes was practically the house band.

Having already appeared backing Brazilian luminaries such as Caetano Veloso and GIlberto Gil, Os Mutantes came into their own flowering on this debut album. Although still relatively obscure outside of Brazil, this album is easily the equal of A-list offerings from folks like The Beatles and The Stones. In fact, the psychedelia here as a fair sight wilder than those bands managed, while still maintaining a great sense of melody and artistry.

"Panis Et Circensis" (Bread And Circuses), the album opener, is a production tour de force which is the peer of other psych production masterpieces such as "Good Vibrations" and "Strawberry Fields Forever." Impressively, where the Beach Boys and the Beatles spent weeks to months perfecting their iconic tracks, Os Mutantes (with the help of Rogerio Duprat) got "Panis Et Circensis" down in a day. Starting with a short fanfare, the tracks shifts through several worlds of sound. It's very much in the 'pocket symphony' mold with seemingly unrelated parts actually working together. For me the highlights are the strange mid-song tape drop out and the almost too busy horn parts punctuating the melody.

Os Mutantes focused more on covers than originals, but unlike many other South American psychedelic groups, the band is outsourcing and collaborating on songs with their countrymen. Jorge Ben shows up in a guest spot to help out on his fabulous "A Minha Menina" while the afore mentioned Gil and Veloso contribute several tracks, including the amazing opener and the tribal rave up of "Bat Macumba."

The bands not-so-secret weapon is the ghostly vocals of Rita Lee. Think of a more emotive Nico or the obviously Mutantes-inspired vocals of Stereolab. Her best showcases are on the almost scary "Le Premier Bonheur Du Jour," in which Lee songs accompanied by the odd choice of the sound of ripping paper, and "O Relogio," which starts mysterious but picks up some definite steam halfway through.

With other highlights like "Trem Fantasma" hanging around this album, we find that Os Mutantes is an extremely focused collection. It's simply a matter of taste which separates the classic from the merely 'above average' (for me "Baby" and "Senhor F" mark the slight mid -album slump). No psych listener should go without at least hearing this one.

Thanks for making this avaiable. I've been reading about them for a while, but I hate buying an album blind - it's so rare that music lives up to the hype. I just started listening and this looks like a keeper.

Do you read the french ? I've written a column about the Mutantes'discography in the website of a friend : you can find it on "http://stoned.circus.free.fr", see the "Chroniques T.", letter M.
Oh! this site is dedicated to the psychedelic music : welcome !
Thanks a lot for this little advertisement... All my hope for your beautiful blog.

I'm afraid that I can't read French, but I'm sure someone checking out the comments does and will appreciate the link. So thanks!

I stumbled across your blog quite accidently and I'm glad I did. I know Mutantes very well, have been hearing theh're music for over 30 years, and I just would like to say that I found your small text on the band very well put together. I think you really did get it. Good for you! I mean, so much is usually missed in translation, so hence my surprise. In a general sense, one tends to divide the Mutantes recordings in three groups. The Tropicalia era, which compreends they're recordings from 1967 - 1969; the hard rock era 1970 - 1972; and the progressive rock era, which begins in 1973 till the demise of the band in 1978. Obviously things aren't as cut and dry in reality. Their 1970 album A Divina Comedia, still has some Tropicalia/psychedlic rock material in it. The same can be said about they're 1972 album No País dos Baurets, where you can hear some progressive rock notions already appearing. I love spreading the word about this band, and I'm so happy that they are finally getting some international acclaim. Any specific info you need about them, say so and I'll shoot you an email.
Take care and nice blog.
- Creedance Kiddo from Whiplash.net