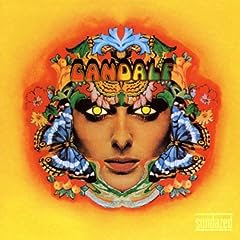 Gandalf is one of the more sought after pieces of late-60's vinyl. This album itself is prime 1967 psychedelia, but as you may note from the date above, a almost-two year delay (by which time the band had long since dissolved!) relagated Gandalf to obscurity. It probably didn't help that the band's name was somewhat of a misnomer anyway as the group spent 98 percent of their existence as the somewhat unfortunately named Rahgoos.

Still, the name Gandalf easily conjures up images of wizardry and songs about elves and gnomes. Strangely enough, we find none of that here. Instead, the band resembles an American version of the Zombies trapped in an acoustically superior well with a predilection towards showtunes about women's accessories ("Golden Earrings," "Scarlet Ribbons," "Tiffany Rings"). Much of the psychedelia on these cover songs involve an amazing amount of echoey reverb on the vocals. Another lynchpin of Gandalf's sound is some extensive use of the Hammond B3 organ. How much you like that particular instrument will likely influence your opinion of Gandalf.

The strange thing about Gandalf, especially for late-1967 (the recording date), is their lack of original tunes. The two present here, "Can You Travel In The Dark Alone" and "I Watch The Moon," are by no means lacking in songwriting chops. In fact they are some of the best songs here, sporting a great west coast-style (even though they were from Jersey) psych-pop structure as opposed to relying on production tricks alone for an altered sound. Apparently, the band simply didn't have enough original material. It's too bad they couldn't have spent 1968 writing and recording more instead of just waiting for the existing album to be released.

Still, Gandalf's cover selections are outstanding, and even the choices that look questionable on paper end up sounding great. Peggy Lee's hit "Golden Earrings" and "Nature Boy" from the interminably strange Eden Ahbez are transformed from what could easily be novelty numbers into dreamy, floating meditations. "Golden Earrings" in particular ended up being Gandalf's single and is probably their signature number. The band also seems to have outsourced three songs from a fellow named Tim Hardin. In fact, the lurching rhythm of "Hang On To A Dream" is an early highlight of the album. "Tiffany Rings" is the only track her which really doesn't do it for me. On this one the group seems to cross the line from mysterious into twee, which for me disturbs the flow of the album.

The album ends with a pair of deeply psychedelic rock songs. Gandalf was not really a showcase for instrumental prowess, but they were able to lock into a great groove which they take time to draw out a little more on "Me About You," and "I Watch The Moon." "I Watch The Moon" in particular is a goldmine for lovers of the Hammond B3 organ, which on the track is matched with some blazing fuzz guitar.

Also of note is the flamboyantly insane cover art. It seems to depict some kind of tripped-out butterfly god or something. The cover alone catapulted Gandalf to the top of my shopping list. The emotionless expression and yellow eyes actually scare me a little bit. The music isn't really wacked out enough to match this prime display of pop art, but it certainly catches one's attention.

Gandalf is far from the top of the 60's rock pile, but it deserves to be heard. The band managed to carve out a sound similar to the Zombies, but with enough of their own touches to keep from sounding like a knockoff.

As a side note, Gandalf 2 saw release from Sundazed early this year. Apparently, it's a collection of demos, live tracks and such, but it interestingly contains far more original songs. I'd be curious to know how the sound quality holds up on the new disc.

Thanks a ton for this! Cant stop singing "Hang On To A Dream", LOVE IT!