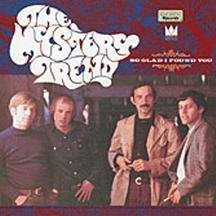 The Mystery Trend's place in music history exists in a strange twilight. I suppose that they're best known for having a place on the Nuggets box set (with their lone single "Johnny Was A Good Boy") and for naming their band off of misinterpreted lyrics out of Dylan's "Like a Rolling Stone" (they should more accurately be The Mystery Tramps). Otherwise, they are now basically a footnote to the San Francisco scene, but still they were there at the start of the scene, playing along with the early Jefferson Airplane and Grateful Dead. The band unfortunately never really found an opportunity to put out any more than a Verve Records single, and this compilation consists of their entire recorded output, the vast majority of which was unreleased until the 1990's. As this is basically everything, it's a little spotty. But the high points are truly spectaular, however, and I feel like if The Mystery Trend had found the opportunity to put together a proper album, it may have been a true classic.

The Mystery Trend does share some similarities with their San Francisco bretheren. The vocal sound is extremely strong and layered, often resembling the Jefferson Airplane at their best. The winding guitar leads also recalls many of the bands from that era. There's a freak-folky sound right in line with the Dead and the Airplane's debut albums. If you're open to the San Francisco scene, there is definitely something here to grab your attention.

The true charm, however, rests in the little differences. The Mystery Trend was a bit older than the rest of the crowd and skipped over some West Coast psychedelic pitfalls. First off, jamming was completely ignored by The Mystery Trend. They were truly fascinated by the art of the pop song, and their strong writing (usually in the hands of keyboardist.vocalist Ron Nagle and guitarist/vocalist Bob Cuff) often recalls that of Burt Bacharach or the Brill Building. Only one track here passes the three minute mark, and that one only makes it to four.

Standing out even more is The Mystery Trend's atypical sound. Psychedelia in general relies on quite a bit of reverb and echo to create a strange vibe. The guitars here are very dry and brittle sounding. Still, they manage to cut right through the powerful rhythm section to make a strong impression. This sound is mixed with Ron Nagle's also bone-dry clavinet. The band may be playing the same notes as their more-poular peers, but the sound ends up being very different. If nothing else, this makes their recordings worth a listen or two. For a fun comparison pair their cover of the Who's "Substitute" along with the original.

The songs, while often strong, remain a mixed bag. This is understandable as this disc is the band's complete recordings and they were never trying to produce an entire album. Both sides of their only single, which included "Johnny Was A Good Boy" and "House On The Hill," are standouts. Even better still are the should-have-been single "Carl Street" (presented in two versions), the lyrically biting "Mercy Killing," and the Bacharach influenced "There It Happened Again." These high points make up for some of the lesser tracks like the dull instrumental "Mambo For Marion," and the annoying "Carrots On A String" (which also shows up twice for some reason). The otherwise average "Shame, Shame, Shame" is notable for including what must be one of the earliest uses of a wah pedal on guitar.

If you can track this one down, So Glad I Found You is a worthwhile and important release that clears up some of the smoke surrounding this formerly enigmatic band from the initial burst of San Francisco psychedelia.

Buy Me:
The Mystery Trend- So Glad I Found You
Posted by Dr. Schluss at 10:45 PM