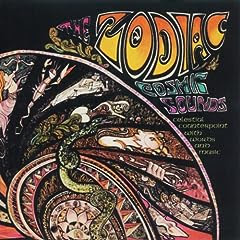 I first came across this album from a buddy of mine living in a concrete warehouse practice space who had procured a vinyl copy of this baby for use in his electronic performances. I was greatly amused by the oddness of The Zodiac and spent the next 5 years searching for my own copy.

The seeds of this particular disc stem from Elektra Records guru, Jac Holzman. At the time primarily a folk label, Holzman was taking some initiative in searching for new, hip sounds. He probably decided that "What's your sign?" was indeed a groovy pick up line in bars, and proceeded to construct a 12 track album based on the signs of the Zodiac. He recruited former folkster Alex Hassilev (of The Limelighters) to produce and far-past-his-youth Mort Garson to arrange the music.

Maybe one of the first rock and/or psychedelic concept albums, Cosmic Sounds is a truly demented journey through pre-fab sound. The Zodiac itself was not really a band, but in fact an Elektra Records project which utilized many members of the Wrecking Crew. These players, who can be heard on most 1965-967 Beach Boys recordings, the "Mr. Tambourine Man" single by The Byrds, and about 8067 other 60's hits are probably among the most renown sessionmen and women ever. They also considered themselves mainly jazz players, and "slummed" to play on rock and pop sessions basically for the money. Still, drummer Hal Blaine and bassist Carol Kaye have admitted their presence on most of the tracks here, and both of them are amazing musicians.

With the talented, but admittedly white collar, musicians in place we'd of course have a highly competent album. To set this one over the edge, however, a few ringers are necessary. Three folks on the record fortunately fit this bill. Emil Richards was recruited as percussionist wildly bashing on anything in hand (including a wide range of ethnic percussion). Electronic experimenter Paul Beaver came about after the initial tracking sessions with his early modular Moog synthesizer in hand, or uh.. trailer (modular Moogs are crazy big). This contributed some properly strange sounds for the time as Cosmic Sounds was likely the first commercial appearance of a Moog synth.

The real lynchpin of this endeavor was narrator Cyrus Faryar. Although the words describing the Zodiac were hacked out by a fellow by the name of Jacques Wilson, Cyrus really brought them to life. Speaking with a seriousness and hubris that would put Jim Morrison to shame, Mr. Faryar somehow managed to intone lines like "Nine times the color red explodes like heated blood" while sounding like he really meant it.

As far as the songs themselves, some of the signs stick out more than others. "Aires-The Fire Fighter" managed to work up a quintessential (if not completely inspired) acid-rock groove, while "Cancer-The Moon Child" creates an atmosphere of 1967-vintage new age bliss. Apparently Cancer wants to be touched by everything. "Libra" takes a musically odd route to being a "Flower Child" which actually manages to not use what are not folky cliches. "Sagittarius-The Versatile Daredevil" gives us a carnival sound which resembles a chopped up and mutilated "Mr. Kite." Unfortunately my sign, represented by "Pisces-The Peace Piper," is a little on the dull side as well as a few other tracks. Fortunately, even on the lesser tracks, Cyrus comes through with his dramatically stated, but incomprehensible ramblings. "To be afraid, and not care that you are afraid, is the courage of which Scorpio is made" indeed.

To be honest, Cosmic Sounds rates a lot higher on the kitsch level than musically. Still, there's a strange naive charm permeating the record. It's a lot of fun to listen to, and as the all-capital purple letters plead on the rear sleeve, Cosmic Sounds MUST BE PLAYED IN THE DARK. If you're looking for something to stack next to Pet Sounds or Forever Changes, Cosmic Sounds will be a massive disappointment. A better mainstream comparison might be The Doors' throwaway track "Horse Lattitudes" found on Strange Days. Cosmic Sounds is a novelty, but one of a high order as far as novelties go.

Buy Me:
The Zodiac - Cosmic Sounds
Posted by Dr. Schluss at 9:55 PM

Thankyou very much doc i feel better already.i haven't heard this since the early 70's and it's still as good to hear. definitely not for cynics.
brian from coventry,u.k.

Hi Dr Schluss Do you have a link for downloading this album?

Thank you for such a great blog.

Thank you for such a great blog.

None of the DL links above are working. Could someone oblige us privileged fans of Mort and upload again?