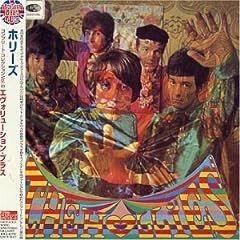 Evolution is the Hollies first profound attempt to dive in the pool of psychedelia. Unlike the later Butterfly, the Hollies brand of Brit-pop doesn't mix particularly well with the psychedelic elements here. Like the weaker tracks on Butterfly, however, the songwriting saves the day and makes for a solid album.

This review focuses on the 2004 Japanese issue of both the mono and stereo Evolution along with the "Carrie Anne"/"Signs That Will Never Change" single.

The old adage that you can't judge a book by its cover applies to Evolution, but unfortunately not in its favor. The cover is an amazing image by The Fool which represents a paisley clad band seemingly reaching through the shrinkwrapping of the album. There is a strange psychedelic overlay consuming the image. The musical contents of the album, however, are basically solid British Invasion pop with some window dressing representing the more cutting egde bands of the period.

"Then The Heartaches Begin" is a solidly constructed opener with a touch of somewhat misplaced fuzz guitar. The first real winner here is in the slightly skewed ballad "Stop Right There." It has a perfect balance of melancholy and hesitant cheeriness that make it a prime candidate for the soundtrack of a future Wes Anderson film. The strange gypsy-like violin part weaving through the later part of the song helps to distinguish the ballad further.

The best parts of the album stay away from psychedelia and reaffirm the Hollies mastery of 1965 styled pop. "You Need Love," "When You're Light's Turned On," and "The Games We Play" would have been plumb singles two years earlier, but probably served to alienate their contemporary audience. "Have You Ever Loved Someone" makes the mistake of using fuzz guitar on what should be a poppier track. The result comes out like The Beach Boys' similarly misguided "Bluebirds Over The Mountain." "Rain On The Windows" add a bit of reverberating orchestation to color its sound to better effect, and the helium voices in "Water On The Brain" anticipates some of the later sound experiments on Butterfly.

Evolution remains strong despite a few questionable decisions, and only grinds to a standstill on two tracks. "Lulluby To Tim" utilized a truely grating warbling vocal effect, while "Ye Olde Toffee Shop" is dated in the most flagrantly twee manner. It's like Willy Wonka, sans any irony, and tends to make me cringe a little bit.

This disc's value is upgraded by the wonderful "Carrie Anne"/"Signs That Will Never Change" single. "Carrie Anne" has some of the best vocal harmonies recorded in the 60's and spices things up a bit with some bongo action. The B-side doesn't overshadow the main attraction, but it's a very pleasant album quality track with a groovy bassline and manages to point towards the future a little more than the past.

Evolution is very much superior in its mono incarnation, with the stereo tracks sporting poorly considered stereo separation and a lack of balance or impact.

Although a little spotty, Evolution provides an interesting bridge between the Hollies beat-based sound of their early albums and the full-on psychedelia of their Butterfly period. The pop aspects are still the main attributes here and the sometimes indiscreet and missplaced psychedelic aspects don't completely ruin the sound.

Hey, you have a great blog here. I came here about a week ago and was trying to grab this one without any luck. Thank you for making it available again; it is very rare indeed! Dave

Thanks! Sorry it wasn't here last week. I just converted this into a fully functioning music blog as opposed to just a review one. I'm glad I can share some difficult to find stuff with folks! I'm based in Japan and run into quite a few CD vinyl replications that are next to impossible to find in the States.