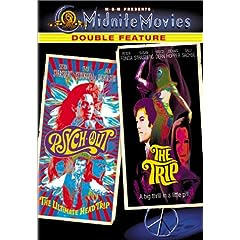 The Trip is a summer of love vintage exploitation film with an impressive pedigree. B-movie guru Roger Corman directed this time capsule in his search for a "new thing" as his well of Edgar Allen Poe films was running dry. None other than Jack Nicholson wrote the twisted screenplay. He wouldn't firmly commit himself to acting until after Easy Rider. His Easy Rider screenmates Peter Fonda (in the lead role) and Dennis Hopper (in a smaller but impactfully insane role) appear on screen. Bruce Dern also shows up with a full beard as Peter Fonda's "trip" guide.

As a sometimes subjective writer, I must admit that this film has a special place in my heart. I first saw it at a screening at Georgia State in downtown Atlanta back in the winter of 1997. This was before the Nuggets sets made it to CD, so in many ways seeing The Trip ignited my pointless, but impassioned, search for off center psychedelia.

The somewhat disposable plot involves Peter Fonda as a commercial director named Paul in the ending stages of a messy divorce. He approaches his friend (played by Bruce Dern) to guide and babysit him during his inward search enhanced by the controversial (but still legal!) drug LSD. After visiting the dealer (Dennis Hopper), Paul begins the titular trip at Dern's swank pad, where the interior design would make Austin Powers (ok, and me too) weep with joy.

Although not lacking in star power, the real selling points of this film are the production design and goofy camera effects. Cormans' films were always filmed on a shoestring budget, but we really do see every dollar on the screen. Unlike many cult films, this is a nice looking and professional film. I feel like Corman managed to set many summer of love cliches in stone with this production. During his trip, Paul finds himself in a primordial forest coming across horse bound sentinals and fair maidens. Later he experiences a whole series of wacky camera effects while trippin' down Sunset Blvd. I doubt what we see on the screen is a particularly accurate description of an LSD trip, but it sure is a lot of fun to watch. While in a groovy basement club, we spot Gram Parsons' (of The Byrds and Flying Burrito Brothers) with his International Submarine Band. Unfortunately for Parsons' fans, his music is overdubbed with what I believe is The Electric Flag.

Everything comes together during a scene (that takes place in Paul's mind) where Paul finds himself on trial for being a selfish bastard. The sets resemble a circus in hell as the camera aimlessly twirls around. And to really set the mood, Dennis Hopper puts in double duty in a second role as the judge/inquisitor.

The dialog in this films is also of note as we find ourselves listening to endless logic loops as Paul tries to answer the inquisitor's questions, make conversation at a laundromat, and almost fail to order a drink at a club. Nicholson really out did himself, or just a lot of drugs, while penning these lines.

Film lore says that the over-30-at-the-time Roger Corman went a little overboard preparing for this film. Apparently, he sampled LSD and spent an evening trying to become a tree or something. He still regarded this as a good trip and had to grill Nicholson and the rest of the cast over what a "bad trip" was like. Strangely enough, the younger and hipper counter culture icon Bruce Dern had never experimented with the drug.

As LSD was well on its way to becoming illegal, Corman was compelled to moralize the ending a bit. This was obviously done in post production. Storywise Paul seems to have found insight and gotten the girl of his dreams, but a cracked mirror effect on the final frame is supposed to suggest that he has in fact gone insane. Fortunately this is followed by the kaleidoscopic credits so I guess insanity much be kind of groovy after all (at least for Paul).

The Trip is far from a masterpiece. To the modern viewer it is cliche-ridden and a little slow moving. Still, it serves as a great time capsule with some visual tips to the avant-garde and give a "before they were famous" glimps of several future stars. The Trip serves especially well as a party movie for some background weirdness.

On DVD the trip is paired with Psych Out, also featuring Bruce Dern and including Jack Nicholson on screen. Many people consider this the better film (I wouldn't agree) but there is some controversy as Psych Out features some unfortunate edits. I'll review Psych Out in more detail at a later date.

Are you ever going to review "Psych Out"?